The Titans have given those who suggest the top eight is set something to think about with an Ash Taylor-inspired 30-10 thumping of the Sharks in extraordinary conditions at Cbus Super Stadium on Saturday night.

Possibly needing to win seven of their remaining eight games to make the finals, Gold Coast claimed the scalp of the defending premiers for the second time this season in front of 14,333 hardy spectators but it was the magnitude of the result and their defensive resolve that will give their fans hope for at least the next few weeks.

The win saw them move up to 12th on the table still two wins outside the top eight and sets up a crucial clash with the Panthers at Pepper Stadium next Saturday, a side who are currently one win ahead of them on the ladder.

It was far and away Taylor's best performance of the season as the 22-year-old not only scored tries and set them up but also dictated the pace of the game with the right kicks at the right time as Gold Coast's lead grew early in the second half.

Torrential rain lashed the area prior to kick-off and continued for the majority of the first half, almost two-thirds of the playing surface under water in something of a sequel to 'Sharknado' of two years ago in Cronulla.

The Sharks started the game without James Maloney and with Jack Bird at five-eighth and despite almost 60 per cent of possession in the first half couldn't crack a resilient Titans defensive line as the home side led 8-0 at the break.

Indeed, the visitors didn't cross the stripe until eight minutes from full-time courtesy of Kurt Capewell and although winger Sosaia Feki grabbed a second consolation try with four minutes left to play it only hurt the Titans in terms of their points differential on the ladder.

With a handy buffer at the break the Titans got off to the perfect start to begin the second term when they were gifted a penalty in the first set and weren't called for a knock-on in front of the posts, Taylor picking up from his superb first half to score his second try two tackles later, the four-pointer bringing up 5,000 points in Titans history.

Taylor turned from finisher to provider five minutes later when he drew Chris Heighington and Wade Graham out of the line to send Kevin Proctor on a 20-metre run to the try-line and in the blink of an eye an eight-point lead had ballooned to a 20-0 advantage.

The Sharks were held up for a fourth time in the game in the 55th minute but rather than being any fault of their own this time it was from a perfectly executed ball-and-all tackle from Jarryd Hayne as Matt Prior seemed destined to crash over beside the posts.

A convincing win turned into a hiding in spectacular fashion in the 60th minute when a flick pass from Tyrone Roberts freed up Leivaha Pulu on the left who brought Dale Copley back on the inside who then offloaded to Joe Greenwood to slide over for the Titans' fifth try of the night.

The sixth came five minutes later when Pat Politoni dived over from dummy-half against his former club and despite two late tries to the Sharks the final 30-10 scoreline still represented a record win for the Titans against the Sharks.

It was an inauspicious start for the Titans when Hayne dropped a Chad Townsend bomb cold in the first minute but his teammates came to his rescue a few tackles later by dragging Bird into touch.

With the rain at its worst Taylor's first kick of the night was a shocker off the side of the boot but on the back of a penalty the Titans half more than made amends with a clever grubber in behind the line that either Konrad Hurrell or Proctor could have claimed, Hurrell scoring the opening try of the game in the 10th minute.

On the back of three successive penalties and a repeat set the Sharks hammered away at the Titans but were repelled at every turn, an error from Bird eventually releasing the pressure gauge as the surface water across the ground continued to spread across the ground.

Gerard Beale and Fa'amanu Brown were both held up over the line and Brown botched another chance in the pool of water under the posts but it was Taylor who added to the Titans' lead, slicing through close to the line after Nathan Peats earned a repeat set by kicking into a puddle inches short of the dead-ball line. 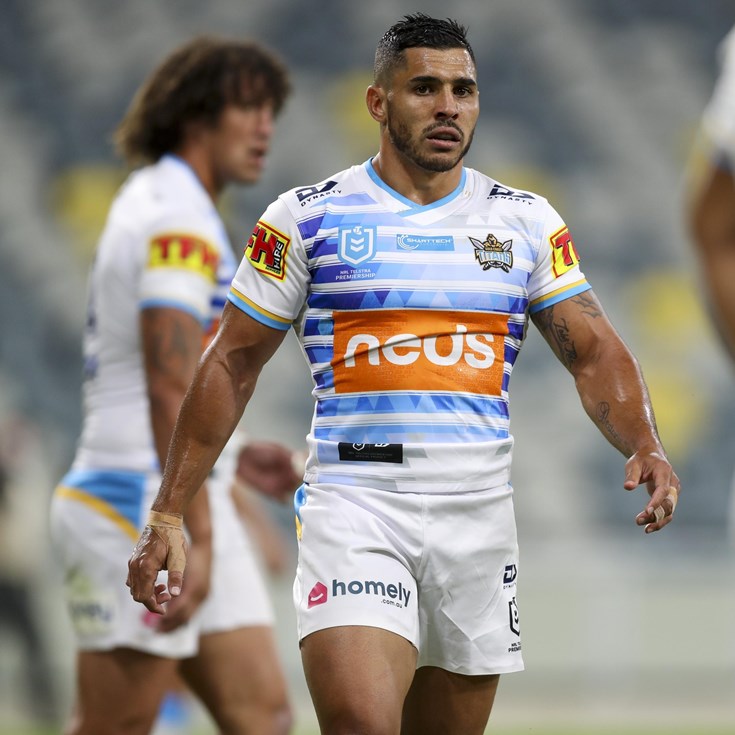 Fogarty Can See Positives Amongst The Negatives