New South Wales Origin hooker Nathan Peats committed himself to a further three years at the Titans because he believes the current playing group can achieve something "special" and he has urged young halfback Ash Taylor to come along for the ride.

Signed until the end of the 2018 season Taylor will become a highly sought after commodity once November 1 passes and he can begin negotiating for the 2019 season and beyond with the club who developed him, the Brisbane Broncos, already circling.

Tickets start from just $27 for the local derby this Saturday night at Cbus Super Stadium. Get your tickets HERE!

Titans officials are already working on retaining the 22-year-old's services long term and with the core of the current playing group locked away Peats sees the team developing into a genuine premiership force in the coming years.

Peats, captain Ryan James, Jarrod Wallace, Kevin Proctor, Konrad Hurrell and Joe Greenwood are all signed through until the end of the 2019 season and while Taylor's future played no part in his decision to re-sign this year, Peats hopes to see the reigning Rookie of the Year continue on the Gold Coast.

"Whether Ash decides to leave or not wasn't going to impact my decision but I'd love to have him here obviously," Peats said ahead of Saturday's local derby against the Broncos.

"I just know that we've got a good side here and we can build something.

"Blokes like Jarrod Wallace and 'Dark' (James) who I play with week in and week out in the middle, I love playing with Kevvie and Koni and I know all those guys are long term.

"I feel as though we can improve our combination a lot over the years and we can actually do something special if we all stuck together as a squad.

"I didn't really think of Ash at the time [of re-signing] but I just knew a number of those I just mentioned were here long term and it would be a bonus of Ash and that stay on."

Another fascinating piece of the puzzle is fullback Jarryd Hayne who after a disrupted start to the season has shown glimpses of the man who was arguably the most exhilarating individual player in the game.

The day after playing in his first Origin match in almost three years Hayne announced that he had taken up the option in his favour to remain with the Titans in 2018 and with his future unsure beyond that Peats hinted that the club might get the very best out of him next year.

"It's obviously been an up and down season with 'Haynesy' with injury and Origin and coming back to the Titans," said Peats, who played in all three Origin matches this year for the Blues.

"If he's looking for a big finish to the year that would be nice for us and then leading into a World Cup he can have a couple of weeks off and really have a big year next year because he'll be off contract.

"A lot of players play out of their skins when they're coming off contract and depending on what he wants to do, whether he wants to stay or not, but hopefully a big off-season and a big season next year."

When Peats arrived on the Gold Coast he did so effectively after being pushed out of the Eels due to their salary cap dramas but says taking on extra responsibility amongst an inexperienced playing group has allowed him to mature and to develop into a leader.

"I didn't want to leave Parramatta in that situation but when I got up here I found a bit of a different love of footy," Peats said.

"I was there for a couple of years and I was used to it and I was quite comfortable and then I came up here to an environment that I didn't know. I had to learn new names and faces and plays and that sparked a bit of nervousness in me.

"I like that nervousness sometimes, it keeps you on your toes.

"In the last 12 months I think I've developed as a person and matured a lot more and I see myself as a massive leader here.

"I wasn't so much of a leader at Parramatta, I was more a young lad coming through and had a lot of senior players there but up here we're a bit short on senior players so I've enjoyed my role of being a leader up here and I can see myself playing here beyond those three years as well if 'King' (Titans coach Neil Henry) still wants me.

"Playing under our coaching staff I think it suits my game a little bit better. I still need to improve on a lot of things but I'm enjoying my time up here." 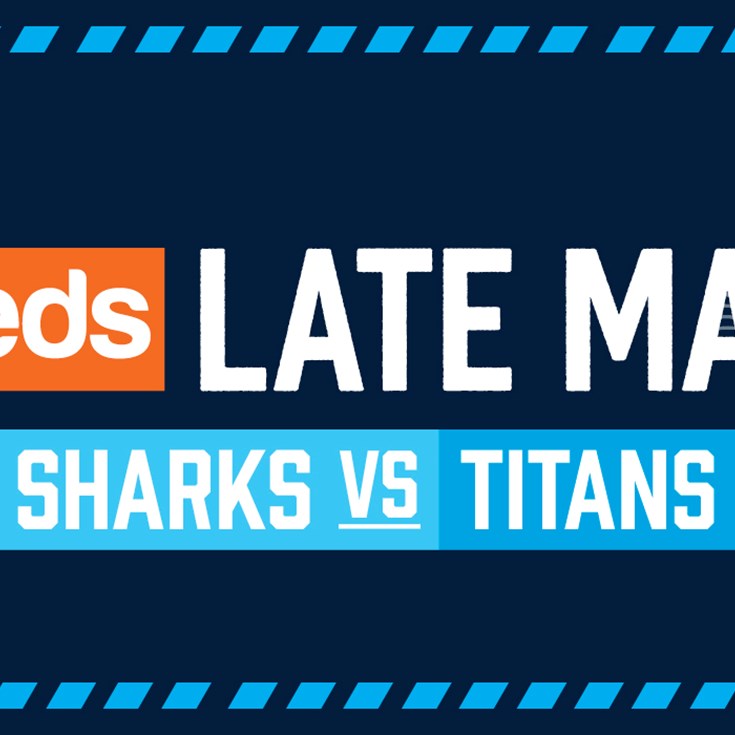 Thompson in for Sharks clash