Injuries have caused chaos among the Maroons forward stocks, leaving coach Kevin Walters with a decision to make around picking debutants, half-fit players or recalling ageing players in his pack for Origin I. NRL.com Stats analyses the options.

It has been a remarkable rise for former Bronco Jarrod Wallace since joining the Titans. He was only handed a debut in last year's game two reshuffle but will now be one of the first forwards picked. Statistically, he edges all the other candidates in total metres and tackle busts while boasting easily the best tackle efficiency.

Scott missed last year due to an ACL injury and most would have expected him to be swept back into the side, but an underwhelming season to date performance-wise meant he was far from a guarantee to add to his 22 Origins. Add in another recent knee niggle and Walters may just have been spared having to make an agonising call on the Origin future of the man who has spent much of his career being among the very best props in the game.

Napa is another whose season has been highly underwhelming but he exploded into life in the round-10 win over the Warriors and was powerful again backing it up against Brisbane (regardless of what you think about his challenge on Korbin Sims that resulted in a broken jaw for the Bronco). That recent spark of life should be enough to convince selectors to let him add to the three Origin caps he earned last year.

Thaiday was controversially pensioned off by Walters after the game-one loss last year but he's enjoyed a bit of a form resurgence this season and with the experience gulf caused by the representative retirements of Cameron Smith, Cooper Cronk and Johnathan Thurston plus the injury to Matt Gillett, the Maroons could do worse than tossing the 29-Origin veteran an SOS for one last series.

Glasby's selection last year raised a few eyebrows but the hard-working Rockhampton product had the last laugh, enjoying an Origin series win and unbeaten 2-0 start to his intestate career. Injury slightly interrupted his club contributions this year but his timely round-11 return gives him some miles in the legs before the June 6 series opener.

Ofahengaue is Tongan-eligible but Queensland-raised and taken on more responsibility in an injury-hit Brisbane pack this year. He looks to be down the pecking order but is a powerful middle forward who could do a job if called upon.

NRL.com verdict: Napa and Wallace to start with Glasby on the bench.

McGuire is an automatic pick if fit but unfortunately the ankle injury picked up in round eight has not recovered in time for him to play round 12, meaning if he gets picked for Origin I it will be his first game in six weeks. No doubt McGuire is fit enough and professional enough to get through it but it's a long way from ideal and a risk in such an important game. In the eight games he has played his defensive numbers are excellent and he has been racking up the run metres and post-contact metres as well.

Arrow has been an absolute sensation since being handed a big-minute starting role at the Titans this year. He is the only Queensland-eligible forward putting up numbers that can compete with some of the power-packed Blues candidates and he's doing it despite being troubled by ongoing back issues and one nasty rib injury. He has the most offloads of any lock this year and is top three for metres and busts. The back issues are a concern but otherwise Arrow's form is absolutely compelling.

Papalii is in tremendous form for a player demoted to the Intrust Super Premiership six weeks ago. The powerful Raider has tended to play in the second row at club level but has often been used as a middle at rep level but a recent switch to lock for Canberra has coincided with a form spike that now has him averaging 126 metres (with 51 post-contact metres per game).

NRL.com verdict: Papalii to start with Arrow on the bench.

It's hard to believe Cooper has only played three Origins, especially given his telepathic combination with Johnathan Thurston over the years. Thurston won't be there but the overall loss of experience and injury to edge back row stalwart Matt Gillett mean Cooper could potentially be a very important cog in the Maroons machine. His stats aren't overwhelming in a struggling Cowboys side but four tries is a solid haul for a back-rower.

Su'A has played for Queensland at under 16s, under 18s and under 20s and it wouldn't surprise at all to see him in maroon at senior level one day. He would be very much a bolter if picked for game one but his recent form has been good. An average of 91 metres from just 57 minutes plus 16 busts and 11 offloads amounts to a useful contribution for the Broncos.

This is the spot Gillett would be in if fit. Kaufusi had a stunning breakout season in 2017, capped off by a World Cup call-up for the Kangaroos. Injury dampened his start to 2018 but he has hit his stride now and there's every chance that what looks to be an inevitable Origin debut comes in the run-on side.

Hess has been a rare strong performer in a struggling Cowboys outfit, producing good numbers both with and without the ball. He played games two and three last year and looked comfortable in his limited minutes. It's possible Walters elevates him to the starting side but at this stage it looks like the 21-year-old's best spot for Queensland is on the bench.

Guerra has been there and done it all before. He was actually one of the many Maroons who paid the price for a shocking game one and was dumped for the remainder of the series as the Maroons stormed home to win it. It's important to note that at that point in time, Guerra's club form at the Roosters was well down on his potential and he didn't offer much in Origin one. However he looks a new player after his shift to Newcastle this year and has been included here as a second-row candidate despite moving to lock at club level over the past two games, returning 85 metres per game with two tries and 23 busts this year.

NRL.com verdict: Kaufusi to start with Hess on the bench 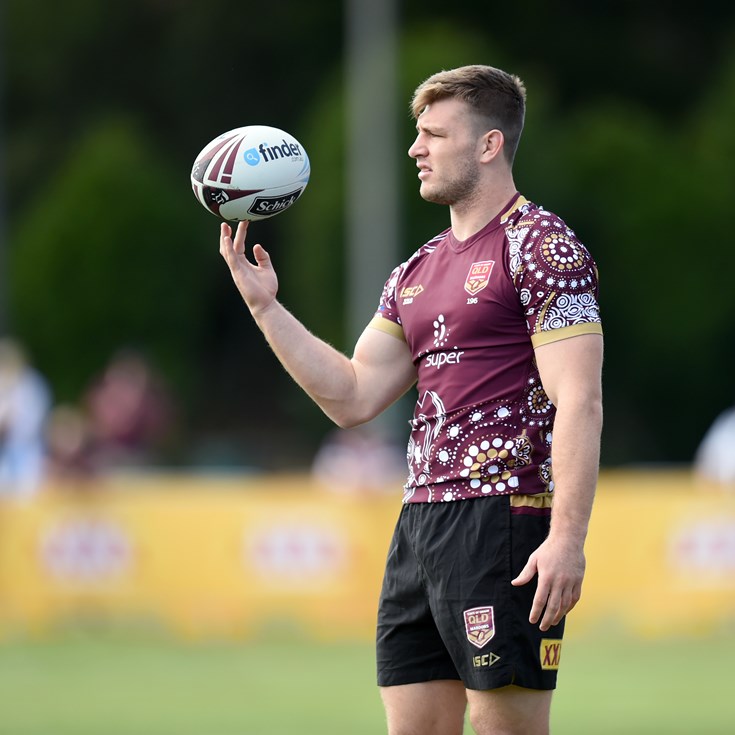 BRENNAN: They did their job

Why Titans teammates Wallace and Arrow are made for Origin

SOO: From the Couch to the Cauldron