Gold Coast coach Garth Brennan has again left major signing Bryce Cartwright out of his 17 for Saturday's clash with the Bulldogs at Belmore and preferred twice-binned tearaway Keegan Hipgrave as his starting second-rower.

Hipgrave has made an unusual name for himself for being suspended (for one week each time) twice in his first three NRL appearances before, last Friday against South Sydney, becoming the first player since 2002 to be sin-binned twice in the same match.

However, it hasn't deterred the 21-year-old local junior attracting the attention of several clubs who see him as a long-term NRL forward of the future. Hipgrave met one of those clubs, Cronulla, last week to discuss a potential switch to the Sharks.

Hipgrave, who has played 11 first-grade games, is off contract at season's end and is keen to stay on the Gold Coast where he was born and raised but the Titans will have to meet market demand to keep him.

He has quickly become the Titans' intimidating figure in defence with his aggressive line-speed and physical contact, and he his mobility has also made him a handful on the edge in attack too.

Hipgrave admits he is learning to temper his exuberance and passion for lifting his team. Having said that, he was unlucky to be binned twice against the Rabbitohs – in the first half for an offside infringement and in the second half for stripping. The minor offences came after a rush of penalties that broke referee Grant Atkins's patience.

"I've calmed down being in the second row [he played his first eight games in the middle]," Hipgrave said.

"I'm learning a lot. I'm not gassing as much but I have to play the way the ref is reffing.

"That's part of the learning curve for me and I have to look closely at that next week.

"It was disappointing and frustrating. I was shattered coming off the second time. I felt like I let the boys down."

When asked about Hipgrave's 10-minute stints to cool his heels, Titans coach Garth Brennan said: "I don't want to change Keegan Hipgrave. I love the fact he gives us a little bit of an X Factor and that aggression and line speed. He's just got to be a bit smarter.

"We all need to be smarter and more disciplined when it comes to penalties. Keegan was just a victim of some other penalties other people had given away.

"A strip is not a sin-binning but the end of the day he was on the back of a number of penalties. He was more a victim of circumstances than the aggressive nature with which he plays."

With prop Jarrod Wallace banned this weekend due to a dangerous contact charge, Will Matthews, who has not played since round 10, has been selected on the bench as an edge player, with Cartwright down the pecking order at No.18 and facing a run on Sunday with Tweed Heads Seagulls if he is not called into the 17.

Jack Stockwell will start in the front row with Morgan Boyle brought onto the bench. Boyle has not played NRL since round eight and has had just one match back, for Burleigh Bears, from a shoulder injury that eventually needs surgery.

The Titans' other young prop, Max King, is sidelined indefinitely and will need a shoulder reconstruction but may play on until the end of the season. 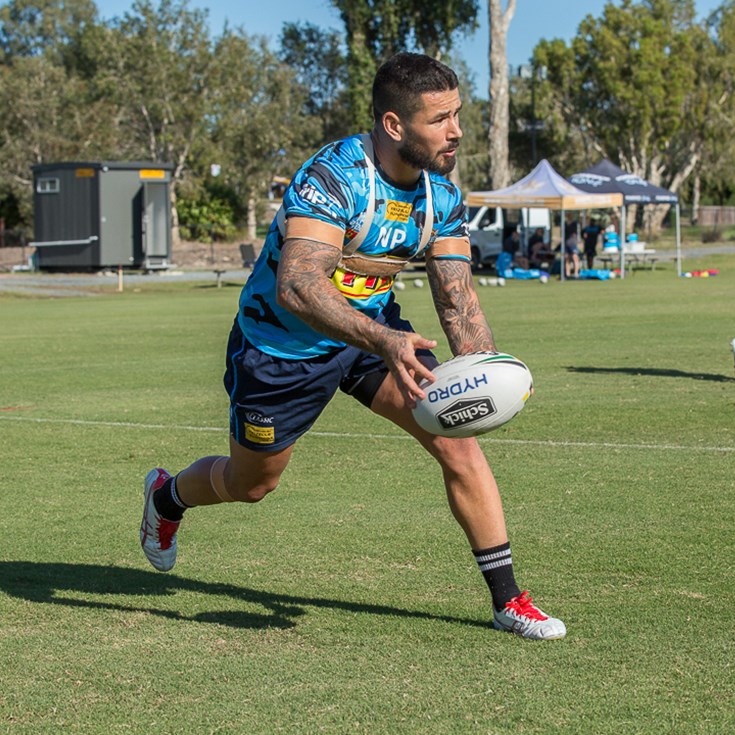