Down but never out, the Newcastle Knights staged a courageous fightback to claim a stirring 30-24 victory over the Gold Coast Titans on Saturday at McDonald Jones Stadium.

The Knights trailed 24-10 with 25 minutes remaining but refused to wilt, swiftly closing the gap to two with converted tries to Lachlan Fitzgibbon and Mitch Barnett.

Ken Sio tied it up with a 68th-minute penalty goal before Newcastle grabbed their first lead since the opening minutes with Connor Watson drawing two defenders and turning a pass inside for Shaun Kenny-Dowall to score the match-winner.

Sio's clutch conversion made it 30-24 and the Knights did enough to keep their noses in front over the final seven minutes.

That early lead was short lived however as Gold Coast seized back the momentum and levelled the scores at 4-4 thanks to some acrobatics from Anthony Don, who placed the ball down with his legs in the air over the touchline.

In his second game back, Mitchell Pearce's kicking game was proving a handful for the Titans, and Fitzgibbon nearly gave the home side the lead again, missing a grubber kick into the in-goal by just centimetres.

With 10 minutes remaining before the break, the Titans turned into the Harlem Globetrotters, desperately keeping the ball alive, and Moeaki Fotuaika gave the visitors a 10-4 lead. The margin was pushed out to eight when a penalty was given right in front of the Newcastle posts.

Some desperate defence from Nick Meaney, in just his second NRL game, denied the Gold Coast at one end, while just minutes later he plucked a Pearce cross-field kick out of the air to ensure the Knights only trailed by two at the break.

It was an explosive start to the second half for the Titans. A line-break from Mitch Rein gave his side the opportunity to attack the Newcastle line, and some poor defence from Nathan Ross allowed Phillip Sami to stroll over untouched in the corner.

A bit of luck led to a second try within the space of four minutes, when an Ash Tayor kick rebounded off a Newcastle player allowing Don to get his second of the match and extend the margin to 14.

But the Knights were not going away, clawing their way back into the contest. The loss of AJ Brimson to concussion made life tougher for the Titans as they tried in vain to hang on.

The loss was the Titans' 12th of the season while Newcastle boosted their record to 8-10 to retain a slim mathematical hope of finishing in the top eight.

News & Notes: The Knights win back-to-back games for the first time since round 7-8 when they beat  Wests Tigers and Manly... crowd 14,095... Titans five-eighth AJ Brimson left the field in the second half for an HIA and did not return... Mitch Barnett had not scored a try in 2018 before his double in this match. 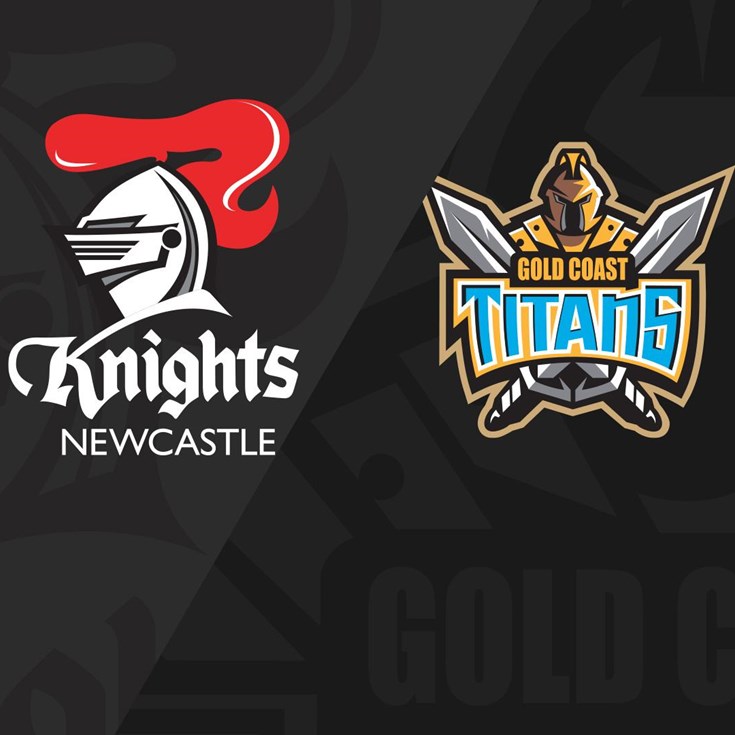