On a week like this, you could forgive Storm skipper Cameron Smith for thinking about retirement.

Carrying a back injury suffered last round and leading a Melbourne side down on troops with Will Chambers suspended and Suliasi Vunivalu, Nelson Asofa-Solomona and Brandon Smith in the casualty ward, there are signs the 35-year-old is finally feeling the pinch after remaining relatively injury-free throughout his storied career.

The great man is off contract at the end of the season and there was talk last month that he'll stick around not only next season but also in 2020.

But given the manner in which he unexpectedly pulled the pin on his Origin career a few months ago, Smith might have another big surprise up his sleeve.

The Titans have shown they can't be taken for granted despite being out of finals contention. And they aren't afraid to play from behind, as they did in big wins over Manly and the Warriors over the past month.

The Storm could be ripe for an upset, but they are also back on top of the Telstra Premiership ladder and are the frontrunners to take out another minor premiership.

Key match-up: It was in round one of the 2003 NRL season that 19-year-old former stablehand Billy Slater debuted with the Storm. More than 15 years later and Slater - retiring after this season - is facing a kid who is just starting his own journey to fame and fortune. Titans fullback AJ Brimson is still only 19 and one of the NRL's hottest young stars. He probably had posters of Slater on his bedroom wall just a few years ago. Brimson will be relishing his clash with the player widely regarded as the greatest fullback of all time.

For the Titans to win: This team has a frustrating habit of running hot and cold from the opening whistle to the full-time siren. Not unlike a few other teams this year, you're never sure what the Titans will dish up. It shouldn't take a half-time blast from the coach (as was the case last week) to play to your potential. The Titans owe it to Garth Brennan to deliver an honest 80-minute effort, with and without the ball. They also need Ash Taylor to be as inspired as he was against Manly.

For the Storm to win: They didn't run up a big score but there was something oh-so Storm-like about last week's near shut-out of Parramatta. Defence was obviously a major focus for the premiers after rare back-to-back losses and that shouldn't change on Saturday. With the finals only a couple of weeks away, Bellamy will be demanding a high intensity performance. If Smith is out his long-time teammate Slater will have to provide his own brand of leadership and direction.

Titans Stat Attack: Winger Anthony Don equalled the club's all-time try-scoring record when he crossed in the fourth minute of last week's big comeback win over Manly. Don has scored 67 tries in 107 games with the Titans, joining former winger David Mead, who finished with 67 tries in 147 games with the club.

Storm Stat Attack: A heavy casualty toll left Melbourne without a single player on the interchange bench for most of the second half last week . And even when they were reduced to 12 men with Cameron Munster's sin-binning, the Storm still didn't crack. They did end up conceding one try with three minutes remaining with 13 men on the field, although replays showed the decision to award it was questionable. We certainly would've heard more about it from Bellamy and the Storm if the game was a lot closer.

And another thing: The writing seems to be on the wall for Michael Gordon. The man teammates refer to as 'Flash' isn't expected to return from a wrist injury this season and might've struggled to regain his spot even if he was healthy, considering Brimson's form at fullback over the past two games. Turning 35 in October, Gordon has another year to run on his contract. But with Tyrone Peachey joining the Titans in 2019, Gordon could be hard-pressed to cement a regular spot in the backline.

Titans: The Titans are 1-17. Will Matthews replaces Bryce Cartwright on the bench in the only change. Leilani Latu and Brendan Elliott dropped out of the squad 24 hours before kick-off.

Storm: Cameron Smith has shaken off a back injury and will play. Christian Welch starts wth Tim Glasby to come off the bench, while Sam Kasiano replaces Ryley Jacks on the interchange. Justin Olam replaces centre Will Chambers (suspension) and Cheyse Blair is in for winger Suliasi Vunivalu (hamstring). Tui Kamikamica joins the bench with Nelson Asofa-Solomona (ankle) and Brandon Smith (knee) out.

Petero Civoniceva's prediction: Cam Smith has been named but it will be interesting to see whether Craig Bellamy would prefer to give him a week off to freshen up ahead of the finals. The absence of Will Chambers hurts the Storm and I think they are vulnerable this week. The Titans have plenty of points in them and if Taylor and Brimson fire they can spring an upset. 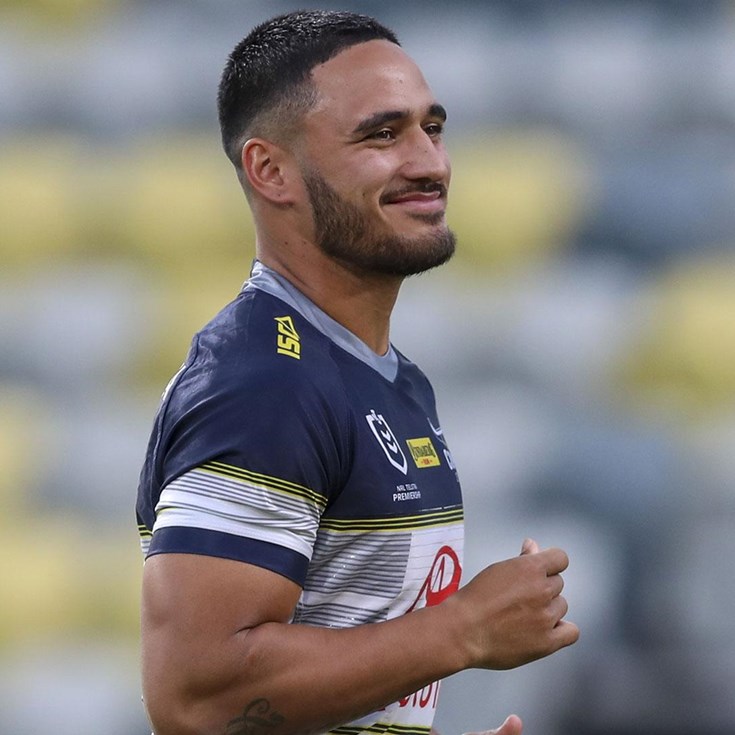