One team is sitting pretty after wins over the 2018 premiers and a side that made it to the second week of last year's finals.

The other has endured a horror start to 2019 with 21-0 and 20-6 losses and injuries to key playmakers all they have to show for their efforts.

The Rabbitohs have looked as good as any side over the first two weeks of the Telstra Premiership. The forwards are firing, Adam Reynolds looks at the top of his game and Wayne Bennett has integrated himself into the club seamlessly.

At the other end of the spectrum, we have the Titans. They've scored one try in two matches while conceding 41 points.

The only negative for the Bunnies was Greg Inglis succumbing to a shoulder injury and withdrawing from Sunday's game.

Still, unless a major reversal of fortune transpires at ANZ Stadium on Sunday night, an 0-3 start is looming large for Garth Brennan and his men.

Rabbitohs: With Greg Inglis (shoulder) out, Dane Gagai moves to centre with Corey Allan debuting on the wing. Rhys Kennedy replaces the suspended Liam Knight on the interchange.

Titans: Garth Brennan has made several late changes for the Gold Coast. Dale Copley replaces Brenko Lee on the wing, Mitch Rein starts in place of the injured Nathan Peats (torn pectoral) at hooker, Ryan James returns to the front row, Bryce Cartwright starts in the back row, Keegan Hipgrave joins the bench and Moeaki Fotuaika drops out.

Cameron Murray v Jai Arrow. The growing case for Murray to play for the Blues in this year's State of Origin series will be tested when he faces Maroons regular Arrow. The Titans forward had a monster afternoon (290 running metres) against the Sharks in round two. Here's hoping he and Murray stage a great personal battle within the match.

For the Rabbitohs to win

After years of being one of the best middle forwards in the game, Sam Burgess has enjoyed a great start to life playing on an edge. As a back-rower, his powerful running game and ability to slip a pass away while being tackled is already proving a great avenue for the Rabbitohs attack. It's still early, but it appears Burgess is still getting better. Get him the ball early and often and good things will follow.

Brennan's side need to turn statistical dominance into points. The Titans enjoyed a 56 per cent share of possession against the Sharks and also completed their sets at a greater rate than the side that ran out 14-point winners. The mix-and-match approach they've been forced to adopt in the halves hasn't helped.

The Titans’ edge defence has been horrible for two weeks now, it is something that needs to be fixed. They need to abide by their structures and Garth Brennan has to do very well to get them to stop leaking points. While you are doing that you won’t win a game. South Sydney have been so good to watch. We haven’t even seen Greg Inglis do anything as yet and they are still winning convincingly. When he does get back on the field at full fitness it will be pretty nice to watch. Rabbitohs by 18

The Rabbitohs have scored 11 tries in two matches but are credited with just 13 offloads. That means there has been a lot of powerful running, clever kicking and passing plays that have put players into open space well before the defensive line has been engaged.

Thirty-two errors in 160 minutes of football is a sobering stat. That's a bit better (or actually worse) than one every five minutes. Scoring tries is already hard enough - the Titans have spent large slices of their opening two matches making it harder.

The draw is stacking up very nicely for the Rabbitohs. After this week's meeting with the Titans they face Manly (away), the Warriors (home) and Bulldogs (away) to wrap up the first quarter of the season. A 6-0 start is well and truly on the cards. 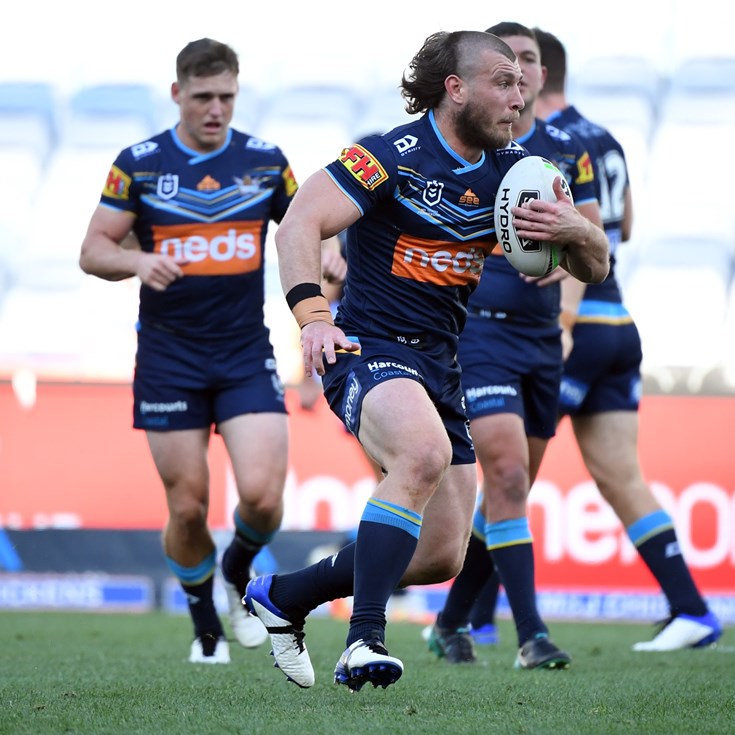