“I like being happy and winning,” is his straightforward justification.

As a youngster, that competitiveness first surfaced playing MarioKart on the Nintendo 64 console that his father Ray had bought but which was soon commandeered by his son.

Jai would play against his sisters and “spit the dummy” if he lost.

Ray played football for Greystanes in western Sydney and went OK, at least according to the man himself.

"He calls himself 'The Legend' but I don't know why,” Arrow smiled.

“I think it's a self-proclaimed nickname but he tells me everyone else gave it to him when he was down there.

Gillett: I had some pretty dark thoughts

“I highly doubt that.”

Jai’s mother, Nicole Manson, was also a highly touted Australian sprinter, helping to infuse their offspring with not only sporting DNA but an undeniable willingness to do whatever it would take to win.

"I presented him with a Player of the Year trophy in under-11s and I just remember everyone talking about this kid who was smaller than everyone else but who had an amazing ability to compete,” said Scott Sattler, who made one appearance for Queensland in 2003.

Ponga: Origin was the biggest game of my life

"This is a kid that had a vision from a very young age that he was going to play at the highest level of rugby league possibly attainable and he was willing to do everything he possibly could.”

Watching the opening 15 minutes of the Titans’ 36-18 win over Manly last Friday it was evident there was something missing.

Two or three times in each set in the opening exchanges there was a pause as players waited for Arrow – missing due to a quad strain suffered during captain’s run – would miraculously materialise and take another carry.

At times he appears incapable of feeling fatigue until he pushes himself to the point that he can barely drag one foot in front of the other.

It is this work ethic that has many former Queensland greats believing that, after just three Origin appearances, Arrow is destined to be a leader for the Maroons  in the not too distant future.

“That's the best way you can lead, by setting the right example,” Arrow tells NRL.com.

“Lead by your actions and not your words. That's a big thing and something that I want to be known as, someone who is leading by example and leading with their actions more than words.

"I saw a few articles where some Queensland greats were saying that I could be a leader for years to come. That's something pretty special.

“I'd never thought I would play one NRL game let alone get to play my fourth Origin. To have guys that I looked up to as a kid saying that sort of stuff is pretty special.

"I definitely want to take that on board and lead by example.”

A school with a strong Polynesian influence, Arrow earned the respect of his peers from disparate backgrounds with both his friendly nature and uncompromising core values.

"He was like Fonzie. No one was willing to do anything until Fonzie said it was OK to do it,” Sattler recalls.

"It was quite amazing to watch. Wherever he went they would just follow.

“He was one of the smallest guys in the side but was the most highly respected and had every player eating out of his hand purely because of the great values that he had.

"We used to sit back and watch this kid Jai Arrow. He had all these bigger players around him that commanded a lot more attention but he ran the show. He was the one they all respected.”

It’s why when he runs out in the No.8 jersey to reprise the role of front-rower that he played so well in Game Three last year Sattler believes Arrow will further entrench his growing stature as a Maroon to be respected.

Even if he is monstered early by the likes of David Klemmer and Paul Vaughan early and has to contend with Payne Haas later in the game, it will be Arrow putting his hand up to take the tough carry when his team needs it the most.

“If you asked him to play for a week and there was no reward at the end of it other than being crowned the king, he would fight tooth and nail to be the last man standing,” said Sattler.

"He was quite often the smallest kid in his group but it was his heart and desire and ability to not take his eyes off the prize that was always going to make him something special.” 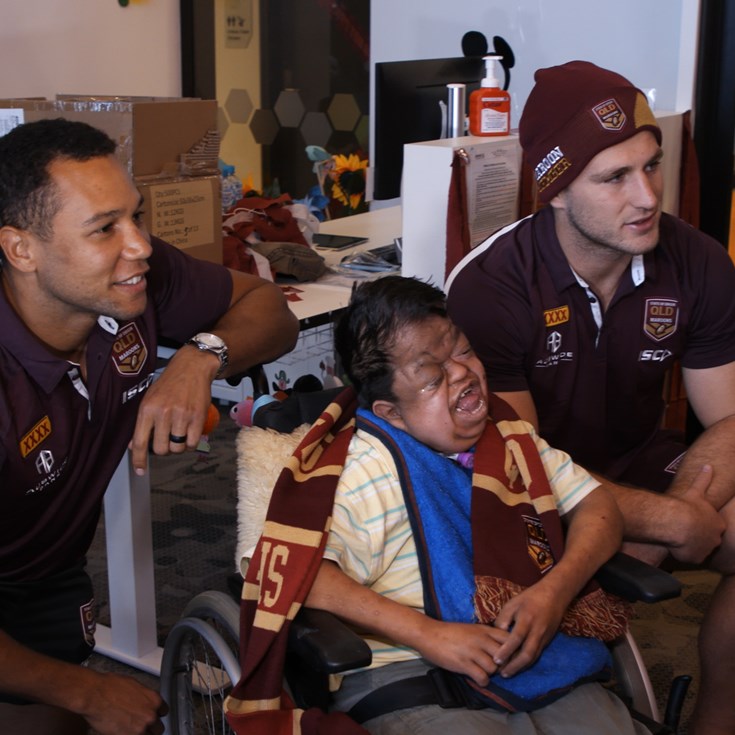 Why Titans teammates Wallace and Arrow are made for Origin

SOO: From the Couch to the Cauldron