Inaugural Gold Coast Titans signing Preston Campbell has spoken about the club’s deep commitment to community during a radio interview on 102.9 Hot Tomato earlier this week.

Universally regarded as one of rugby league’s finest ambassadors, Campbell is again on-board at the Titans in a mentoring role.

The former Dally M Medal winner praised the club’s work across all areas of the community, saying it was a key ingredient behind the Titans’ success on and off the field during the club’s formative years.

“It was amazing,” Campbell said. “I think back in the early days, right from the start, we had an idea that we wanted to be a successful club, not only on the field, but off the field as well and we put a major effort into the community work in the early days and it’s obviously still around today.”

Community is at the heart of the Titans, with Preston adamant the community work and support paved the way for the club’s early success and its growth into an organisation the Gold Coast could be proud of.

“When things weren’t going too well on the field, we always had them people in community keeping us up, always encouraging us because we needed them,” he said. “We needed them, and they were always there for us.

“We’ve come in with a new team (in 2007) and it was very historical being part of a team that’s never been around before, so it was very exciting for us.

“The rugby league was really good. I mean, we had a great squad and we improved every year on the footy field.

“We came to a point in 2010 where we were one game away from the grand final, and the years previous to that we just improved every year, and in all that time the community work off the field was always amazing.”

Born in Inverell in northern NSW, Preston grew up in the First Nation community of Tingha, before launching his NRL career on the Gold Coast with the Chargers.

“Throughout his NRL career, Preston tirelessly campaigned for inclusion and to increase opportunities for youth growing up in communities across the country.

It’s an area he believes the Titans community team have excelled in.

“When you grow up in a First Nation’s community, you tend to have blinkers on and you don’t tend to see all the opportunities that are available for you out there,” he said.

“Obviously education is a big thing, and I am a big believer that education gives you more choices and the more you know, the more you can get into. So it’s about trying to expose our communities to the great things that are already going on.”

The Coghlan Group – long-time supporters of the Gold Coast Titans and the Gold Coast community – today pledged $30,000 dollars to the Titans Community Kick-In campaign, with the funds to be utilised in the Physical Disabilities Rugby League and Leagueability programs.

You can donate now by texting “TITANS” to 0437 371 371 and following the prompts, or online at community.titans.com.au. 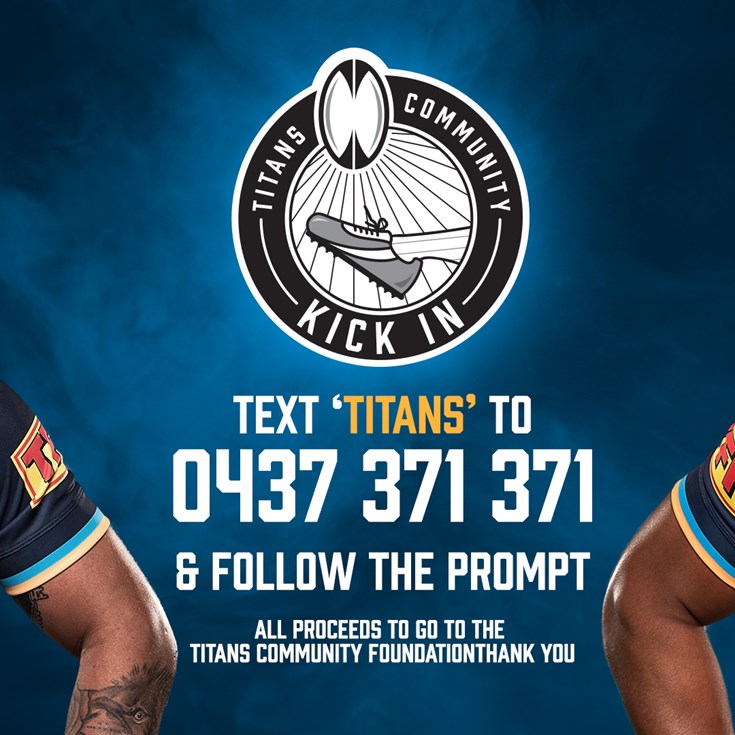 Play your Part, Kick in for the Coast