Titans Senior Coach Craig Hodges has had his final word ahead of the road trip to Melbourne this weekend to face the Storm at AAMI Park.

Here are five talking points ahead of the match:

1. The tough assignment ahead

“It certainly doesn’t get any easier (taking on the Storm),” Hodges said.

“We’re getting to the end of a long season, a draining season, and we’re definitely under the pump.

“With all of that said, the players are excited about the opportunity, so we’ll see what they can bring.”

Hodges said the Titans were bracing for the Storm to be at their best after they were beaten at home last weekend by Canberra.

“I don’t think it’s a great time to get them, let alone after a loss at home,” Hodges said.

“It’s certainly not a great time for us.

Hodges said the extra experience of Michael Gordon at fullback and the return of Jarrod Wallace off the bench would be crucial to the Titans’ chances.

“They’ve been around a long time and won’t be phased by the situation or the opponent,” Hodges said.

“They get out there and do their job. I’m happy to have them back in the side.

“There’s a little bit of strength coming back into the side. Our bench is probably the strongest it’s been in a while.

“I’m excited about what we can do, albeit against tough opposition.”

Hodges said he was pleased with the experiment of unleashing “mongrel” dogs Nathan Peats and Mitch Rein as a double-act patrolling the middle of the field for the Titans last weekend against the Eels.

“I know they’re a little smaller, but they are our most competitive players,” Hodges said. “Along with Wallace and (Jai) Whitbread, they’re the last of our fit guys.

“Those guys are competitive, and they’ll try and take on that Melbourne pack. We’ll try and go with them set for set.

“I know it’s not ideal having two hookers in Rein and Peats out there at the same time, but they don’t actually play like that.

“They’re mongrel dogs who’ll get around and try to clean everything up. They’ll get into those big Melbourne forwards and they’ll help bring the rest of the team with them.”

5. The road trip ahead

Hodges said the Titans were well aware of the size of the task awaiting them at AAMI Park on Sunday.

“There’s no surprises with it. We haven’t had to watch much video on Melbourne this week,” he said.

“If you’ve watched any football over the last 10-15 years, you know what to expect from Melbourne.

“You know what they’ll bring after a loss as well. We know exactly what they’re going to bring.

“We’re not going into it just hoping to hold our gloves up for as long as we can. We want to bring the fight to them. We’re excited about that.” 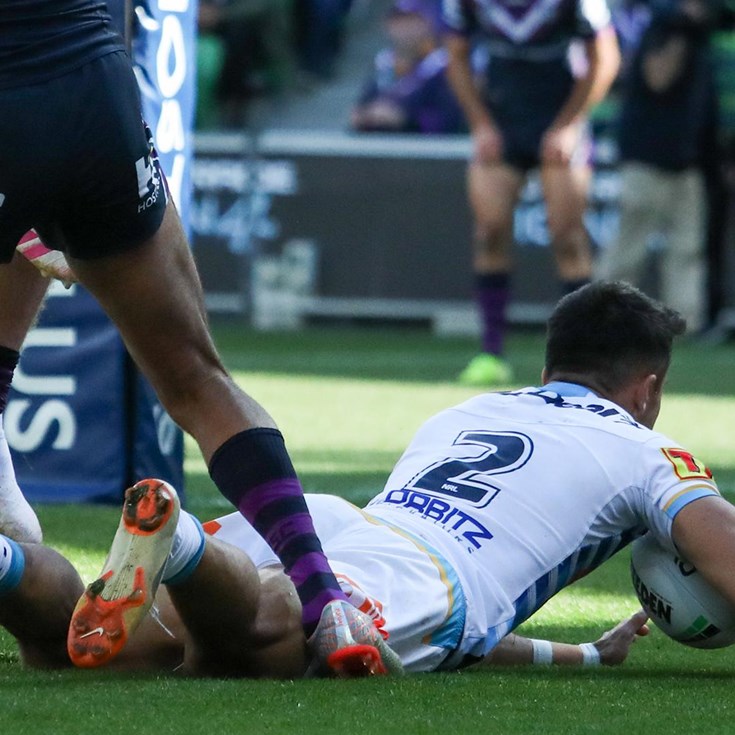