George Rose once told teammates he would have paid to play for the Indigenous All Stars and his passion for the concept has been recognised with selection in the NRL.com Team of the Decade.

To mark the 10th anniversary of the first All Stars match in 2010, NRL.com asked a group of coaches, former players and officials who have been involved with the concept to select their Indigenous All Stars Team of the Decade.

Many of the 17-man squad pick themselves, with Johnathan Thurston and Greg Inglis considered future Immortals and Justin Hodges, Scott Prince, Greg Bird, Andrew Fifita and Ryan James being other unanimous selections.

Campbell, the 2001 Dally M medalist, was also a popular choice, despite only playing in the first All Stars match, with many of the selectors wanting to recognise the contribution players made to the concept and the Indigenous community as well as their on-field performance.

Rose was the only member of the Indigenous All Stars Team of the Decade not to have represented at Test or Origin level or to have played in the now defunct City-Country fixture.

However, the former Roosters, Sea Eagles, Storm and Dragons prop featured in the front row or on the bench in the sides chosen by eight of the nine selectors.

He not only enjoyed cult hero status among fans but was a favourite of coaches and teammates.

The Indigenous All Stars Team of the Decade

"In my mind, a guy like George Rose is a bloody legend," Bennett said.

"I loved it when he went to Melbourne though, and they tried to make him lose weight. It just didn’t work for him. It's one of the reasons those guys play like they do because they are who they are, you don’t want to change them."

Henry, who coached the inaugural Indigenous All Stars team in 2010, told how Rose tired of legendary trainer Billy Johnstone making the players weigh in every day so he wrote 124kg on the scales.

Fanning, the ARL Indigenous Council chair, said: "George Rose changed the perception that our team wouldn't have any size."

Campbell, who was the driving force behind the All Stars concept, usually thanks the players after each game but Rose was someone he never needed to thank.

"He said 'I’d pay to get a chance to play in this team every year'," Campbell said. "Just on his passion and obviously the way he played the game, George had to be there.

"He played with vigour, a lot has been spoken about his physique and fitness or lack thereof but in that game the big fella always put in 100%.

Manly second-rower Joel Thompson was also chosen by all but one of the selectors, while Blake Ferguson and Wade Graham featured in seven of the nine teams.

Thompson will surpass Rose and Johnathan Thurston as the most capped Indigenous All Stars player when he runs out with the team for the seventh time in Saturday's clash with the Maori All Stars at Cbus Super Stadium.

He is one of five members of the current squad named in the Team of the Decade, along with Ferguson, Graham, Nathan Peats and Tyrone Peachey, while Fifita and James were ruled out with injury.

Team of the Decade - the selectors

"I wanted Presto in there because he is the heart and soul of the concept and a champion - and a handy player.

"Wendell as well for embracing the game - out of retirement and I got to put him in the second row [which he blew up about]. His legacy for Indigenous players has been great as well.

"It’s a powerful and sharp back five; GI and Hodgo in the centres, size and speed, and very capable defenders, with Fergo great on kick returns and finishing.

"JT is a champion and he and Princey complement each other. Both had outstanding career - great kicking games, both play on the ball, and are great talkers.

"Fifita, James and Rose have earned their spots and Sam can push up to the front row when needed. A good balance of work rate and attacking flair.

"Joel Thompson is very underrated, runs a great line on the edge and defends well. Birdy is Birdy -  tough, a bit of lip, his unpredictability is needed and keeps the opposition honest.

"Tyrone Peachey has plenty of positions covered so he is the ideal 14th man. Wade Graham has the same attributes with a bigger body and maybe I’m being a bit sentimental but I love Mango. He can play a number of positions as well and had a great combination [sixth sense] with Jonno.

"I’ve left out a few great players, Ben Barba is a little unlucky, as is Latrell, but I feel that others have contributed more over the decade."

"I liked the concept when it came out, I think it has been great and I have always supported it because I know how much it means to the Indigenous players.

"The games are always played in great spirit and there have been some really great contests.

"Nathan Merritt, look at his record, he played [All Stars] for a number of years and that was at the end of his career, not at the beginning of his career. He was a wonderful finisher.

"Wendell only played in the first but I have got to have him in there somewhere.

"Travis Waddell is my hooker. He played a few games for them and he was a tough little bastard. I loved him. I know he hasn’t got the reputation of Nathan Peats but I coached Travis Waddell at Newcastle so I know what he brings."

"I used not just game performance but how the players approached the whole week/concept and the impact they have had on the game and in community through that.

"Greg Inglis’s game time has been phenomenal but leading the war cry has changed community attitudes to the game and our people - a superstar.

"Johnathon Thurston took away from the first camp a desire to learn more about his people and has built his next career focussed on that. Also, the GOAT.

"Ryan James's leadership during all stars and ensuring the week is successful for players engaging in culture has been exceptional.

"George Rose changed the perception that our team wouldn't have any size.

"Latrell Mitchell has had limited game time to date but he is certainly one of the guys who people come to see. Without Preston Campbell there is no team.

"Tyrone Roberts was difficult to leave out. His contribution on the field was very consistent but his attitude and effort in the events of the week and his promotion of culture makes him hard not to pick."

Steve Renouf (member of Indigenous Team of the Century)

“Preston Campbell has to be number one – he is the founder.

"In the forwards, Greg Bird is a tough and talented player, Wade Graham and Sam Thaiday are streets ahead of others in their positions, Andrew Fifita and Ryan James are the two best performing front rowers over the decade, while Travis Waddell was always reliable and stood up in these games.

"The bench players deserve to be in the team. George Rose has to be in somewhere just by games played, but very much a crowd favourite."

"I’ve picked the team based on balance of squad needed to play a game in the modern era, with two front-rowers on the interchange and two utilities who can play in the backs or forwards for flexibility.

"I also took into consideration number of games played by the individuals and their influence on the All Stars concept and the game of rugby league.

"Players who have missed out in the backs are Preston Campbell, Matty Bowen, Tyrone Roberts, Dane Gagai, Jack Wighton and Latrell Mitchell but only through the weight of games played through the decade of the All Stars contest and the high calibre of players to pick from.

"There are so many quality Indigenous backs who have played or are still playing that make it a difficult decision.

"In the forwards, the notable omissions are Carl Webb, who played with such passion in the Indigenous jersey in those early games in 2010 and 2011, plus David Fifita who has only begun his career in the NRL and played one game for the Indigenous team last year."

"There have been so many players who have performed at this level but I have to have Preston in there somewhere for what he did for this game.

"It was really hard to leave some people out but I think it is a really good team, they all played well and gave their all every time they played so that is why I picked them."

"I feel uncomfortable because everyone who has played in the All Stars I love and greatly appreciate their involvement.

"I always thank them after every game for being involved but George Rose is one of those guys I don’t need to thank, he said 'I’d pay to get a chance to play in this team every year'.

"Joel Thompson, like George, is just passionate about who he is and keeping in mind most of these boys have gotten a lot more out of the game than what they have put in because they have put a stack in but I know they have gotten something in return.

"JT will tell you himself that he knew who he was but he didn’t know where he came from. The skills and talent of JT and Scott Prince can’t be questioned in the halves.

"I have picked Will Chambers on the wing because there is just no space for him in the centres, with Justin and Greg there. You can’t keep those boys out of the team on their talent but they were also real leaders. They liked to joke around but they also had a lot of respect on the field and off it.”

"It makes me so proud to see how much talent we have had in rugby league over the years.

"These players have bought so much to league and their skills have amazed fans on the field, but they have also been great role models for our people off it, and have made a huge difference to our communities, and in our communities, as leaders.

"I think the past decade has been the best ever in Indigenous football in the NRL so that definitely made finalising my team very difficult."

"Preston has to be there for his contribution to the Indigenous All Stars concept over more than a decade, and he was also a great player.

"Joel Thompson has carried the torch as the only survivor from the inaugural team in 2010 and while he hasn't received the recognition at representative level he has probably deserved, his passion is obvious every time he plays.

"George Rose is another whose leadership and influence off the field has inspired teammates, while Travis Waddell is an under-rated hooker who never let anyone down.

"Many of the big names such as Inglis, Thurston, Hodges, Prince and Bird pick themselves but they always took great pride in their performance every time they pulled on the Indigenous jersey and were great role models.

"It was hard to leave out Latrell Mitchell after his decision to turn down a trip to England to play in the World Club Challenge so he could play in last year's match but he is only young so is likely to be in the Indigenous All Stars team of the next decade." 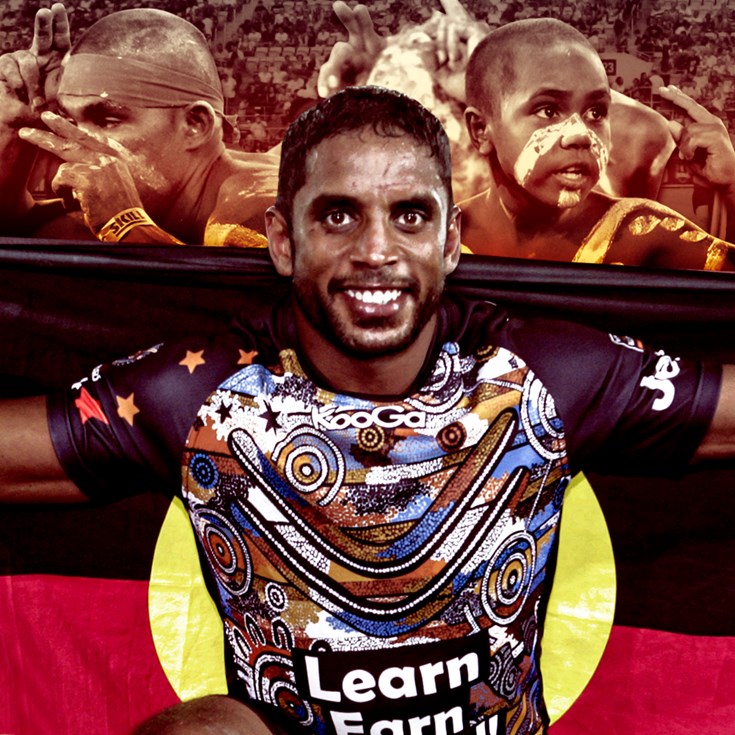 Peachey keen for All Stars concept to live on