It wasn’t always pretty, but the gritty Gold Coast proved themselves to be the fightin’ Titans with a thrilling 16-12 win over the New Zealand Warriors at Cbus Super Stadium.

In front of a reduced-capacity crowd of 5206, the Titans somehow picked themselves off the canvas – with everything going against them – to not only stay in the fight but land the knock-out blow with an incredible try five minutes from fulltime to Beau Fermor.

On the day the Titans said farewell to club pioneer Tom Searle, whose funeral was held the day of the game, the team he helped create showed all the fighting qualities that “The Lion” showed in his 50 years of service to the game.

Already smashed by injuries with eight top-liners sidelined, the Titans fought back from a 12-0 deficit after seven minutes of the game to keep the Warriors scoreless for the next 73 – and secure one of the club’s gutsiest wins.

Ash Taylor and Keegan Hipgrave left the field injured late in the game after heroic turns, but their teammates lifted to get the job done without them – halfback Jamal Fogarty stepping up to be the match-winner the Titans needed.

Fogarty delivered the kick into the in-goal that set up Fermor’s try, and produced a 40-20 kick in the dying moments to kill off any chance of a Warriors fightback.

This game was all about effort for the Titans – they did it the hard way. But they did it and got the job done.

Similarly, Fermor’s try was all about effort – somehow planting the ball on a precious few blades of grass before the deadball line to send Titans fans into raptures, and the club sailing up the premiership ladder.

The Titans looked down and out on a number of occasions, and again made life unbearably tough for themselves and their supporters with a lack of respect for possession.

But they kept getting up, working and willing themselves into the game. And they got their reward.

There were heroes everywhere – Hipgrave was so brave playing on with his injury, Fogarty orchestrated the win, and forwards Jaimin Jolliffe, Moe Fotuaika, Sam Stone, Jai Arrow, Sam Lisone and Tyrone Peachey were enormous.

The Warriors may have come to Cbus Super Stadium dressed like blankets, but their opening to the game was proof enough that they had not come to the Gold Coast for a picnic as they jumped out to a 12-0 lead after only seven minutes.

Titans errors gave the Warriors all the field position and opportunity they needed to take control of the game.

The Titans didn’t touch the ball until the sixth minute, and then they squandered it on the third tackle.

But just when it looked like a long night ahead, hope shone through as the Titans started to find their feet.

Debutant Treymain Spry was denied his first career try when he was bundled into touch over the line, and then Sam Stone – another of this week’s new faces – changed the course of the game with sheer enthusiasm, earning an error out of the Warriors with great kick-chase pressure.

From the scrum, the ball went right and the energy and speed of Corey Thompson created enough room for Anthony Don to fight his way over out wide in the 20th minute.

Another lovely conversion from Taylor reduced the scoreline to 12-6, and that was the way it stayed for the final 20 minutes of the half.

Second-gamer Fermor nearly broke through in the 25th minute but was held up, but all things considered, the Titans would have been pleased to have only been six points in arrears at the break.

How the Titans managed it is anyone’s guess, with the Gold Coast repelling wave after wave of Warriors attack to keep their line intact.

While their handling was poor, the courage and commitment of the Titans in defence could not be questioned. Three times the Titans held Warriors players up over the line to deny them a try with desperation defence.

That courage and commitment was personified by backrower Hipgrave, who battled on to see out the game despite having to play through the obvious pain of a shoulder injury he picked up in the 29th minute.

While the polish clearly wasn’t there, the effort certainly was – and it was keeping the Titans in the hunt.

It was another effort play the put the Titan within striking distance just after halftime, with Tyrone Peachey and Stone combining to score a remarkable try in the 48th minute to narrow the gap to 12-10.

Taylor drilled a grubber kick into the in-goal, and while the kick was far too heavy, Peachey refused to give up on the chase, careering after the ball and desperately throwing it back into the field of play as it – and he – were crossing the dead-ball line.

Stone, backing up diligently inside, got the reward – falling on the ball to score and put the spring back into the Titans’ step and lay the foundations for a second-half surge to victory. 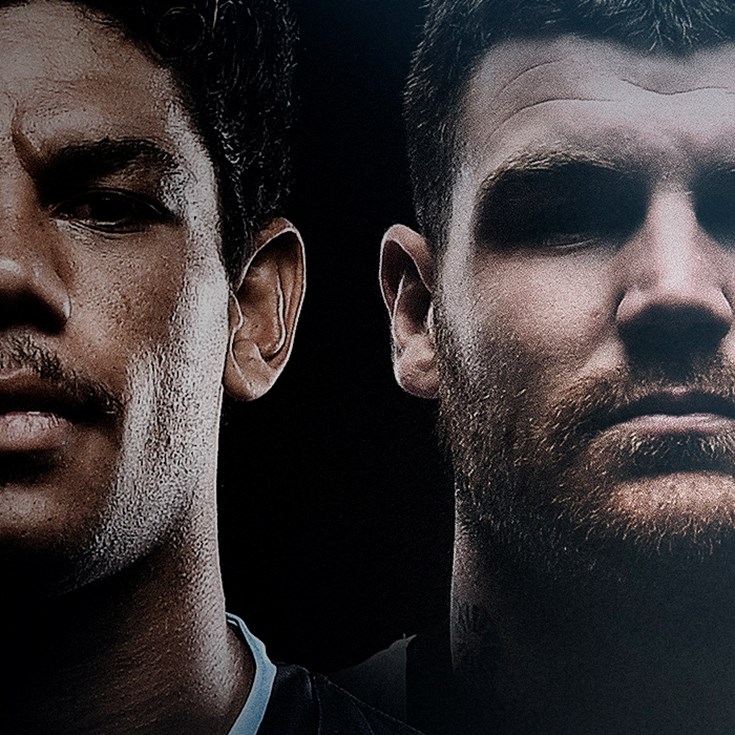 Titans get jump on Cowboys to claim Queensland bragging rights