Canterbury have earned plenty of plaudits for competitive performances against top eight sides in recent weeks but still haven't tasted victory since round 14.

This match has been transferred from a 2pm kick-off at Cbus Super Stadium on Sunday to 6pm on Monday at Suncorp Stadium in Brisbane due to the revised round 20 draw brought about by Queensland's snap lockdown.

Just like that win over the Dragons seven weeks ago, the Bulldogs face a team on the fringe of finals contention in the Gold Coast.

Coach Trent Barrett will be encouraged by the improvements his side has shown in attack and eager for them to match that with a similar increase in discipline following key forward Luke Thompson's dangerous contact ban.

Titans mentor Justin Holbrook is in a much better place following the Gold Coast's much-improved form in their win over the Dragons - an effort that was highlighted by the return of back-rower David Fifita to his devastating best.

Ava Seumanufagai was the other player omitted from the squad when the team was cut back to 19. Joe Stimson was the last player cut an hour before kick-off and Falakiko Manu is 18th man.

Recalled halfback Kyle Flanagan gets another chance after being dropped in round 16 with Lachlan Lewis relegated to the extended bench.

Titans: As he did last week against the Dragons, Justin Holbrook has moved David Fifita to the bench and Beau Fermor will start the game.

Jamal Fogarty was the last man cut an hour before kick-off and Sam McIntyre is 18th man.

Recalled centre Esan Marsters replaces Patrick Herbert (suspension) on the right edge while Brian Kelly takes his place on the left side after overcoming an ankle injury suffered last week.

Sam Stone and Anthony Don were the first two players cut from the squad.

The Titans have won three of their past four games against the Bulldogs.

Josh Jackson v David Fifita: Hard-working veteran Jackson will be looking to rally the Canterbury pack as they brace to contain the rampaging Titans back-rower because whether he starts the game or comes off the bench Fifita will be looking to do harm to the Bulldogs defensive line.

Jackson only trails fellow back-rower Corey Waddell, the team's top tackler with 520, by eight despite having played six fewer games while Fifita (128) leads the NRL for tackle breaks by a massive 30 over second-placed Brian To'o and has scored more tries than any other forward in the competition.

Poor discipline continues to hurt the Bulldogs but the Gold Coast also need to clean up their act. Canterbury is the most-penalised team in the competition with 98 while the Titans round out the top five with 82. 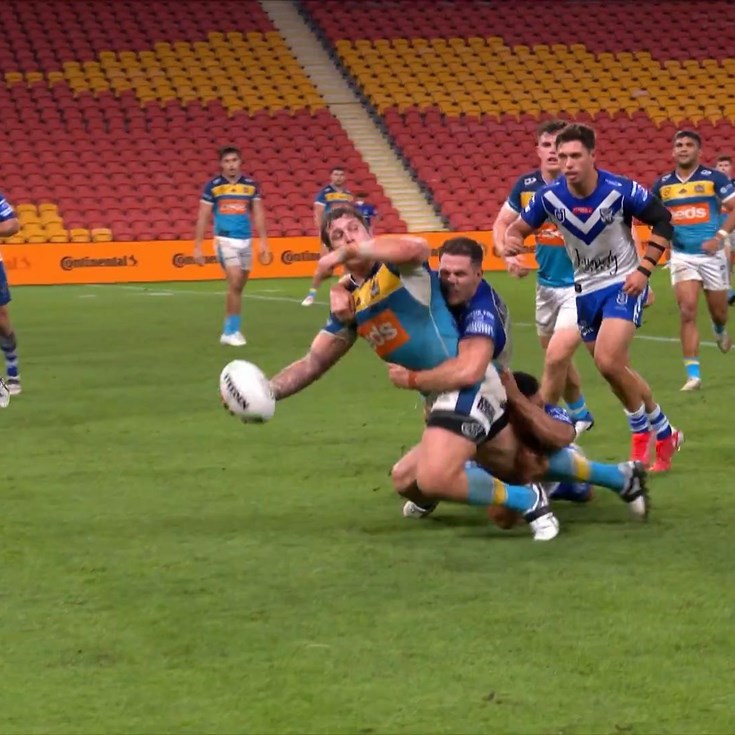 Wallace with a wonder ball for Kelly to get a double

Marzhew scores after the Bulldogs fail to nullify a kick