The Titans have fallen agonisingly short of an incredible finals victory.

The game against the Sydney Roosters in Townsville came down to one frantic minute.

Trailing by a point, the task for the Gold Coast was simple.  Travel 98 metres down-field and find the points needed.

Beau Fermor made a bust, finding space and galloping 70 metres down-field before giving the ball to Phillip Sami.  With one last play, the Titans spun the ball to the right where they appeared to have numbers, but the ball couldn’t find Corey Thompson on the flank and it was the experienced Sydney team who progress to week two of the finals.

It was a finals epic.

Both teams had momentum at times in what was an 80 minute arm-wrestle.

The score tells of a Roosters victory, but for Titans fans the full story of the game is worth reading.

The Gold Coast haven’t played finals football in five seasons.  The Roosters are an experienced finals contender.  In this clash though, the Titans learnt why their opponents have been successful, but also showed the competition why they will be a team that contends in years to come.

It was a testing opening exchange, with both teams exchanging blows and errors as they looked to gain the initial advantage.

After nine minutes, it was the Roosters who had the first chance to score points.

Attacking from inside the Titans 20, the Roosters kicked on the third tackle with James Tedesco rolling the ball for Victory Radley.  Radley jostled with Tyrone Peachey, before Jayden Campbell also joined the contest to deny the Roosters a try.  On replay, it was deemed the Peachey forced Tedesco off the ball and a professional foul was called.  Peachey was sent to the sin bin for ten minutes and the Titans were down to 12-men.

The Roosters did open the scoring, but it was thanks to Adam Keighran’s boot with the centre kicking the penalty goal that ensued from the Peachey penalty.

Four minutes into Peachey’s time on the sideline, the Titans hit back with a penalty goal of their own after its deemed that Josh Morris provided an escort as Brian Kelly chased a Gold Coast kick.

Jamal Fogarty slotted the conversion and scores were level.

Jarrod Wallace had a strong opening half and a great offload in the set after the penalty found Jayden Campbell who made metres.  Attacking inside the 20, the momentum was brought to a half when Mitch Rein looked to find Tino Fa’asuamaleaui with a flat pass only for it to be called forward.

The Roosters gave the ball back through the same method, with Radley throwing it forward in the following set.

Kevin Proctor left the field in the 17th minute, with David Fifita injected.

Radley was rattled by Wallace and Fermor and coughed up the ball a minute later, but the Titans weren’t able to capitalise.

Peachey returned to the field and not only did the Titans defence hold the Roosters at bay, they also managed to level the scores in the period that he was off the field.

The Sydney team’s first points came in the 23rd minute and it some pretty ball-playing from Tedesco that created the opportunity for his winger to score.  The Roosters fullback received the ball as it went through the hands to the righthand side and with a double-pump he was able to draw a defender and create space for Matt Ikuvalu who dived into the corner.

Off the kick-off, a big shot from Wallace forced the ball loose and the Titans were straight back into attack.  After creating the error, Wallace made one of his own.

Again it was the number eight who the commentators were calling minutes later.  The Roosters tried a set play for Tedesco with a lovely inside ball, but it was Wallace who read the play and took an intercept before galloping downfield.  The only thing missing was pace as the prop was rundown.  Sam Lisone made a dent in the defence, in particular Victor Radley as the Titans continued to attack, and the Roosters lock stayed down with what appeared to be a shoulder complaint.

At the half-hour mark, Fifita looked to have yet another try for his season.  He beat around half a dozen defenders and scored on the right.  Patrick Herbert, who had a huge game both with and without the ball, was the lead runner and was the man under review when the referees had a look at Fifita’s try.  It was decided that Fifita caught the ball on the inside of Herbert and gained an advantage, so the try was denied.

The momentum quickly swung, with Radley making a bust and finding Tedesco backing up inside for more points.

Sam Verrills was put on report in the 35th min for a high shot on Brian Kelly and left the field with blood pouring from his nose.

Great defence from Fifita forced a Roosters error and with two minutes remaining the Titans enforcer was screaming at his team to pack the scrum to ensure they had time to attack one last time before the break.

Fa’asuamaleaui had the Titans close to the line, but it was the final play of the set where the Titans scored with Tyrone Peachey rolling a grubber into the in-goal for a flying Beau Fermor to finish.  The conversion after the half-time siren missed, meaning the Roosters took a 12 points to 6 lead into the break.

An error from Fa’asuamaleaui in the first set after the break gave the Roosters a chance and they capitalised.  With the ball moving left, Corey Thompson created enough pressure to ensure Tedesco couldn’t catch or pass.  The problem was, he managed a brilliant bat on play that fell to Daniel Tupou with the winger scoring in the corner.

The Titans hit back though and refused to go away, with this young Gold Coast team defying their finals experience to continually fight.  A Fogarty bomb fell metres from the Roosters line and with Herbert providing the contest, Keighran and Tupou got in each other’s way and the ball fell to the ground.  Waiting was Fa’asuamaleaui who collected the scraps and scored under the posts.

In the minutes following, Tyrone Peachey was caught with the ball on the last and the Roosters had field position.  It looked like position would turn into points when a nice right side set play from a scum saw Ikuvalu cross for another.  Given a try on-field, on review it was shown that the same offence the hurt the Titans in the first half has been committed with Tedesco collecting the ball inside the lead runner before finding the winger and the try was reversed.

The Titans were next to score and it was something out of nothing.  A messy passage of play saw the ball on the deck and eventually it ended up with Kelly.  From a standing start he beat Angus Crichton and Isaac Liu, fending first and then sprinting his way to score under the posts.

The arm-wrestle went back to the Sydney side next, with a great play from Liu giving his team a repeat set.  After some great goal-line defence from the Titans looked to have shut down their final tackle options, Liu (who will join the Titans in 2022) managed to hack a kick through that forced a repeat set.  It was a key play as his side scored off the next set and again it was Tedesco that was the man involved.  With little on offer, he went to the blind side, beating defenders before finding Josh Morris who scored.

Down by six, the Titans refused to go away.

A last tackle bomb was diffused by the Roosters just centimetres from their line and they looked to have stopped a Titans raid.  Working the ball off their line, Ikuvalu dropped the ball and as it bounced off his shoulder it landed in Wallace’s hands who had just metres to the try line.  The prop dove under the posts and the conversion saw scores locked at 24 with ten minutes remaining.

From there it became a shootout.

The first shot – Sam Walker.  The Roosters half has his kick charged down by Erin Clark.  With a repeat set on the line, the Titans defence forced an error and with six minutes left it was their turn to try for the point.

The second shot – Tyrone Peachey.  The Titans five-eighth was in position after some huge runs from Moeaki Fotuaika and Jaimin Jolliffe.  Peachey hit his shot well, but dragged right.

The third shot – Walker again.  An error from the Titans gave the Roosters field position and this time, it landed.  After kicking the winning field-goal when the two sides met in the regular season, he again slotted the point.

The Roosters received the short kick-off and wound down the clock.

The Titans had one last chance.

1:05 left on the clock and 98 metres to travel.  After two hit-ups, the ball found Beau Fermor who burst through the defence, sprinting 70 metres down-field before finding Phil Sami.  The Titans swung the ball right and looked to have an overlap.  Kelly found Fogarty who gave the ball quickly to Herbert.  With Fifita and Thompson outside him, the centre carried the ball as he searched for an opportunity.  A flick pass went behind Thompson and tumbled into touch and the Titans season came to an end.

It was a one-point victory for the Roosters, but for Titans fans there was plenty to be proud of. 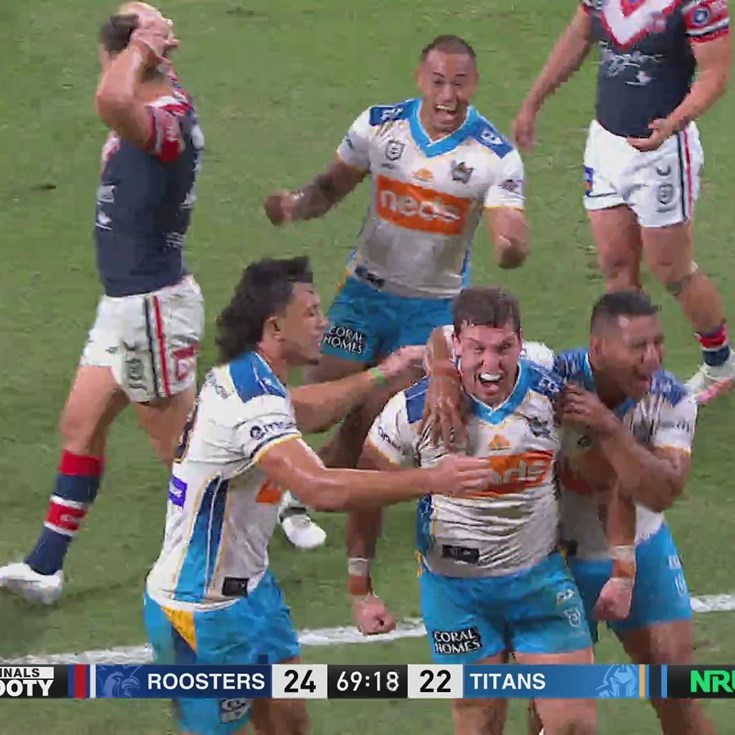