Now you’ve got the Titans 2022 NRL draw, need to pick out the key match-ups?  We’ve got you covered.

With a four-game flexi membership you can literally pick the games you want to attend at Cbus Super Stadium next season.  Here are the ones that we’ve highlighted.

Remember the last time we met the New Zealand side?  It was a physical encounter at Cbus Super Stadium in the final round of the season, with the Titans winning 44 points to nil.  With a big contingent of Kiwis on the Coast, the Warriors clash is always a highlight.  Add to this that the Titans NRLW side will host the Broncos at home and this is a must-watch fixture.

Titans fans, you're going to see plenty of Parramatta early in the season.  We'll travel to Sydney in round one to take on the Eels, but they'll be back at our house in round five.  It's a great timeslot on a Saturday night and it is against opponents who have been finals regulars over recent seasons.

A 'Blockbuster' 2022 at Cbus Super Stadium

Last year, we played the Panthers at Suncorp Stadium as part of Magic Round.  Next season, the defending NRL premiers return to the Gold Coast.  You'll see their young guns in Cleary, Luai, Crichton and To'o take on the Titans young brigade headlined by Brimson, Fifita, Fa'asuamaleaui and Campbell.

Round 14 v Rabbitohs (Saturday 11th June, 3:00pm)
We had the Rabbitohs at home in 2021.  The Bunnies won the game, but we like to remind you of David Fifita's hat-trick instead!  The Titans will be determined to get the win at home this season against last year's grand finalists.  This is a great timeslot for watching footy and a great chance to bring the family to Cbus for an afternoon out.

David Fifita gets his second hat-trick of the year

Make sure this date is circled on your calendar.  The Macca's Local Derby sees the Broncos head down to Cbus Super Stadium in July.  This one speaks for itself.  There is nothing better than the rivalry between the two teams and we can't wait to notch another derby win against our old enemy!

Another great timeslot and this should be a great game of footy.  Jamal Fogarty will be back at Cbus as a Raider and they'll be looking to push back into the finals after missing a spot in 2021.

We were due to host the "Green Machine" in 2021, but COVID forced our home game south to Sydney.  We put 44 points on the Raiders in a record breaking performance in July last year and will be looking for more of the same in front of the Legion next season. 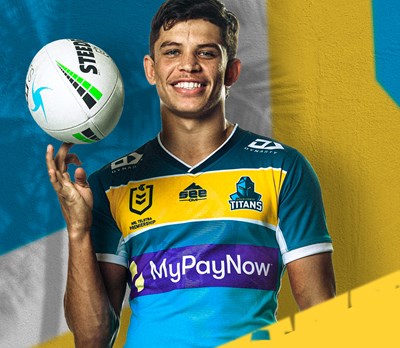 Package name:
4-Game Flexi
Package price:
From 11.80 for per month