The Gold Coast Titans Sapphire Series side have made it three from three, after narrowly defeating the USQ Jets 47 – 45.

The match was a hard-fought battle at Ipswich Basketball Stadium, with both teams putting it all on the line in a thrilling display of netball, however the Gold Coast Titans triumphed and held their lead as the fulltime whistle sounded. 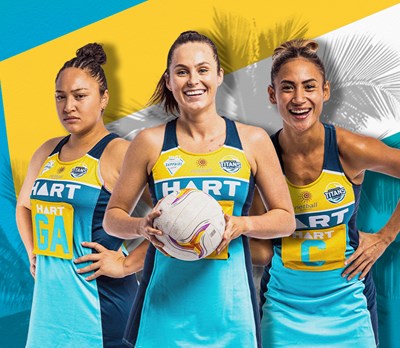 “I’m so proud of our girls – it was a great team effort”, said Coach Temepara Bailey.
“We knew it was going to be tough heading into the match, however, we trusted the process as well as each other.”

Trust was a word that was mentioned consistently throughout the game, as the Titans fought against the Jets in a physical battle.

Goal shooters Olivia Dijkstra, Abigail Meafou and Leah Pue played critical roles in keeping Jets defenders out of play, allowing the Titans to take the lead which was held throughout the game.

The game was filled with high pressure moments, where suffocating defence and secure passages of play in attack for the Titans proved to be the winning secret. Jessica Milne was tenacious in goal keeper, confusing the space for the Jets resulting in opportunities won for the Gold Coast.

The Titan’s midcourt were crucial to the momentum of the game, providing drive and bravery in the game’s surging moments, whilst also maintaining calm throughout intense passages. Captain Kristen Oxenford set the tone for the side, whilst wing attack Jordan Ngarimu entered the second half providing fantastic speed and vision into the circle.

“We grinded right until the final whistle” said coach Bailey, which ultimately lead to the Titan’s success on the road.

On the following day, the Titans Ruby Series side travelled as well, taking on the USC Thunder on the Sunshine Coast. Securing themselves a 44-39 win against USC, the girls have set themselves up with a good momentum to carry into Tuesday nights clash against QUT.

The undefeated Gold Coast Titans Sapphire Series team will take on 2021 premiership winners, the ACU Brisbane North Cougars next Saturday May 14 in a top of the table clash.

The Ruby team will have another quick turnaround, taking on QUT Netball on Tuesday May 10 at Nissan Area.

Broncos derby has Jolliffe primed in return from injury

Alick loving the league life on the Gold Coast

Corey Thompson excited for Cobbo match-up in Indigenous Round clash

Presented by
10 hours ago