Inspired by a Jarryd Hayne double that could well have been four the Titans fought back from a half-time deficit to score 32 unanswered points and overwhelm the Knights 38-8 at Cbus Super Stadium on Saturday.

The lop-sided final scoreline again does no justice to the energy and enthusiasm with which the Knights played for the first 40 minutes, the class of the Titans' playmakers and in particular Hayne proving the difference.

‌With his team down 8-0 after 19 minutes Hayne took matters into his own hands by taking a quick tap from a penalty 10 metres out and barging his way through three Newcastle defenders in the 24th minute and almost had a second in spectacular fashion on the stroke of half-time.

His second did come after only eight minutes of the second half when he proved unstoppable close to the line off an Ash Taylor pass and he was denied another in the dying minutes when he was held up over the line.

The Titans made a late shuffle to their playmaking positions with Hayne moving from fullback to left centre, Tyrone Roberts shifting to fullback and Kane Elgey coming into the side from the bench to start at five-eighth.

For the first half it looked as though too many playmakers would disrupt their cohesion but they clicked into gear in the second term, ably assisted by a rampaging Konrad Hurrell who scored a double of his own.

Whether it was a ploy from Titans coach Neil Henry to ease the workload on Hayne in just his second game back we won't know for another fortnight but it was clear the longer the game went that the point-scoring potency of the Titans is undeniable when all four are on the field.

For the fourth time this year and with 42 per cent of possession the determined Knights took a deserved 8-6 lead into the half-time break but it took just three minutes for the Titans to wrest it away, Kane Elgey dummying and stepping off his left foot to score from close range.

That lead soon became eight when Hayne crashed through off a short pass by Taylor to snare his second of the afternoon and after absorbing pressure applied by Newcastle on the back of three straight penalties the Titans' avalanche of points continued.

They marched up the field and on the last play scored their fourth try when Konrad Hurrell surged through to take a chip kick by Taylor close to the ground and score.

When back-rower Joe Greenwood performed a one-on-one strip on Brock Lamb 10 metres out and crashed his way over the result was beyond doubt, further tries to Hurrell and Ryan James inflating the final winning margin to 30 points.

Both sides were guilty of making errors early in the tackle counts throughout the first half, typified by a Hurrell knock-on from a drop-out in the 33rd minute and Nathan Ross being bundled into touch on the first tackle from the scrum that followed.

In a game that promised to help kick-start the Titans' season it was the Knights who were the more industrious and energetic, their 8-0 lead after 19 minutes thoroughly deserved.

Some enterprising play by the Knights saw them cross the Titans' line in the 12th minute but fullback Brendan Elliot was held up by Roberts, Peats and the goal-post pad, before an error by Titans winger Dan Sarginson invited them to try again a minute later where Sam Stone crashed over for the second try of his NRL career and his second against the Titans.

A 45-metre bust from Daniel Saifiti through an awful attempt at tackle by Ryan Simpkins carried the Knights back deep into Titans territory where they extended their lead with a 19th-minute penalty but Hayne soon took matters into his own hands.

The absorbing battle in the centres between Hayne and Dane Gagai went up a level after 24 minutes when after earning a penalty for interference in the play-the-ball, Hayne took a quick tap from just outside the Knights' 10-metre line and burrowed under three defenders to open the Titans' account.

The Titans' sixth error of the half came three minutes prior to half-time with both Jarrod Wallace and Jacob Saifiti leaving the field for head injury assessments as a result of the collision, Wallace playing no further part in the match. 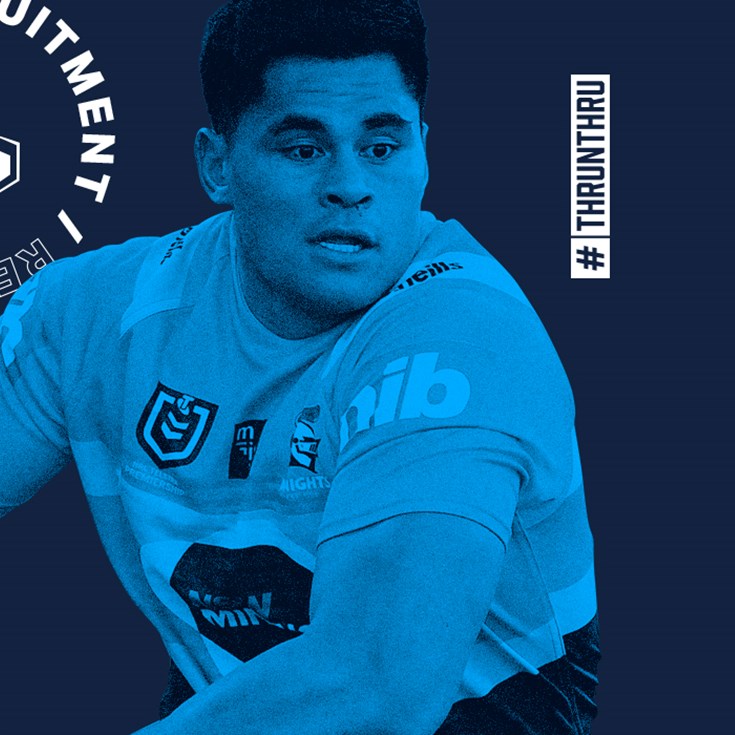 HERMAN HEADED TO THE TITANS