As he tried to put his life back together after the most public and devastating setback of his career, the Salvation Army indeed became Kevin Proctor’s salvation.

Ordered to undergo 50 hours of community service by the Titans (and also fined $20,000 and stood down for four matches) after the alcohol and drug-fuelled incident involving Kiwi Test teammate Jesse Bromwich in Canberra last May, Proctor sat with the club's welfare manager Peter Smith and they chose the Salvation Army.

Smith often takes other Titans players with him to visit a rehabilitation and detoxification unit where they are left “gob smacked” at how drugs or alcohol can ruin lives.

It is no longer a chore for Proctor, who was back there voluntarily last week.

It changed his outlook on life, and on how fortunate he was yet didn't realise it.

But what Kevin Proctor does in the community on the Gold Coast is nothing that extraordinary, or rare, for Titans players.

It is inherent in the DNA of the Gold Coast club that has had more behavioural battles than any rival in the past five years yet has never shied away from staying in touch with the community and junior football.

This year the Titans have partnered with the Australian Sports Foundation to widen its community reach, which involves players spending around 15-20 hours a week helping a variety of groups. It's part of NRL life that rarely gets publicity.

Titans halfback Ash Taylor heads to community and game development manager Renee Cohen's desk every few days to ask what work he can do for her. He is passionate particularly about helping indigenous youth.

One of the most moving gestures came in 2015 and led to more than 66,000 people viewing a video clip showing Titans of the time, Luke Douglas and Matt Srama, accompanying passionate supporter Jade Elliott, in her wheelchair due to Duchenne muscular dystrophy, as her 'dates' at her year 12 graduation night which she described as "the greatest night of my life".

Over the past decade the Titans have delivered almost 4,400 appearances by players and contributed over 17,000 hours to projects and work across the Gold Coast community. It is believed to be more than any other club.

The special aspect is that most players devote the time because they want to, not because they are directed to.

Perhaps Proctor's experience has been the most confronting.

He often visits the Salvos' detoxification facility at Eagle Heights, where up to 11 patients live-in as part of their rehabilitation program. They are the 'hard-core' drug or alcohol-dependents, who in many cases have been abandoned by their families or threatened by drug dealers and had almost run out of hope.

Former first-grader Smith has taken other Titans, Greenwood, Max King, Tony Mata’utia, Dale Copley and Alexander Brimson to the facility to provide an insight into the lives of those less fortunate than them. Smith says they leave "gob smacked".

"As big a thing as what I thought my situation was, I'd go there and see people struggling every day with something 10-times as bad as what I went through," Proctor said of his early visits.

"It kind of made me look at things differently. You don't want that sort of stuff  to happen [his public shaming in Canberra] but you become even more grateful for the position you're in and don't take it for granted any more.

"I'd go to different departments, with guys who have just come in or been there for six months. It's pretty confronting and then you go to the guys who have been in there for eight to 10 months and had real hard-core addictions."

Proctor did many hours gardening with a patient called Cameron and was touched when he was asked to speak at Cameron's graduation from the Salvation Army unit.

"He was a good person; he told me what he went through and had overcome, and it was awesome for me to see how far he had gone," Proctor said.

"You might just say one thing that will help a person there, which is good. But they don't realise how it's helping me as well, making me feel better about myself.

"Every footy player probably takes our fortunate position as full-time professionals for granted to some extent. But you don't know what you had until it's gone or just about taken away from you.

"Some take a lot longer to notice that. It’s good for young guys to hear stories from people like that, to show that they should be more appreciate what they’ve got.

"I let a lot of people down but I've learned my lesson and it's how you bounce back after those tough times that is the important thing and I think I've seen the light."

Hurrell is the biggest fan-favourite at the Titans since foundation player Preston Campbell, who set the platform for community liaison.

For a player who was at the crossroads when he was released from his Warriors contract, it is his work on the Gold Coast away from his bustling on-field runs and smiling post-match photos with spectators that has seen the whole region embrace him.

To see him run around with young people with varied disabilities at Touch Football Specialised, and to witness his special bond with 14-year-old Candice Green who suffers severe scoliosis and is unable to talk, is inspirational.

"I think I get more out of it than they do," said Hurrell.

"To see the smiles on their faces and the love they have for the game makes me so happy and I enjoy every moment I spend with them.

"I have a special bond with Candice and seeing the hard work she does to build her strength and then the excitement she gets when she achieves something is great."

Halfback Taylor, who often travels back to his home on the Darling Downs for appearances, put the players' attitude into perspective.

"In the NRL environment you can be hailed as super-human but this brings you back to earth and to real life," he said at the launch of the Titans' partnership with Australian Sports Foundation.

"To connect with different people in the community who don't have as fortunate lives, I just feel better within myself and makes my job a lot easier. It's more than about just what I can do as a footballer. 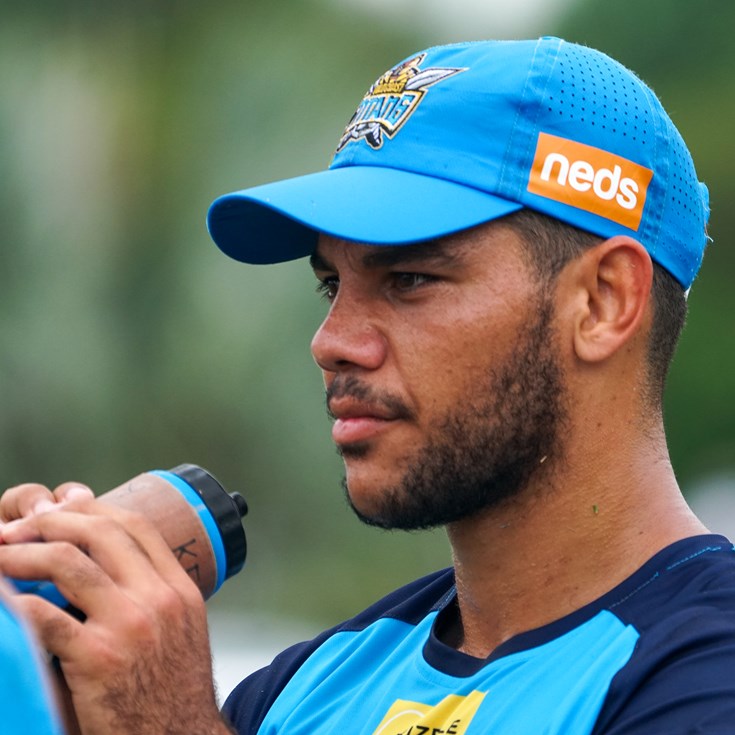