Fifteen thousand fresh faced, friendly volunteers with a can-do attitude will be for many, a lasting and pleasing memory of the Gold Coast Commonwealth Games.

Armed with great big smiles, giant Borobi hands, good humour and a willingness to assist at all times, the Game Shapers ensured the Games experience was a hassle free and enjoyable one for all who attended events across the City.

On Saturday night, the TFH Gold Coast Titans teamed up with Coca Cola to thank the games volunteers for their remarkable efforts, inviting them and their families to attend the clubs home game against the Sharks.

Gold Coaster Howard Williams volunteered at the Sydney Olympic Games in Two Thousand and was one of the first to put his name down for the 2018 Commonwealth Games.

"I did most of the work on the road events, the Marathon and the fun run which was great, I enjoyed the marathon"

Like many of the Game Shapers, Howard has been surprised at the community feedback and warmth shown to the volunteer army which was largely coordinated by former Gold Coast Titans Star Mat Rogers and couldn't believe it when he received an invitation from Coca Cola and the Gold Coast Titans to attend the weekends ANZAC Round match.

Howard who has previously assisted at gold Coast Titans games selling doubles tickets with the Lions Club, saying it was great to sit in the stands with his fellow Game Shapers and enjoy a great night out.

Likewise, Mike who danced in the closing ceremony just wanted to play a role in the biggest event ever held on the Gold Coast.

"I have always been a Titans supporter, ever since they joined the NRL some years back, I'm a long-term Gold Coast guy, it's great to be here tonight and I hope they go well this year"

Away from the Aussie medal Gold Rush, the games unearthed and put on display for all to see, the Gold Coasts a strong community spirit and a willingness to play a role in assisting those who need it and to ensure the City is promoted in the best possible light.

"To say I have been a part of something, a once in a lifetime experience and also I do a lot of volunteering with my son's football club, when he was in gymnastics and I just love volunteering and to be able to help people out"

Cassandras free ticket allowed her to enjoy a Gold Coast Titans home game for the first time, and with certainty, she told the Titans TV team it won't be her last visit to CBUS Super Stadium.

"It's amazing, I have never been here before and so to be able to look at the crowds and the atmosphere has been amazing"

Cassandra not alone with her reasons for volunteering or enjoying the Titans Game day experience.

"Coca Cola had a big involvement in the games and immediately committed to our thank you initiative, it was a fantastic example of the club and our partners working together to achieve a great community goal" Robinson said.

The Game Shapers, many of them dressed in their Games uniforms were seated together in the southern stand and interviewed and publicly thanked on Titans Game Day TV. 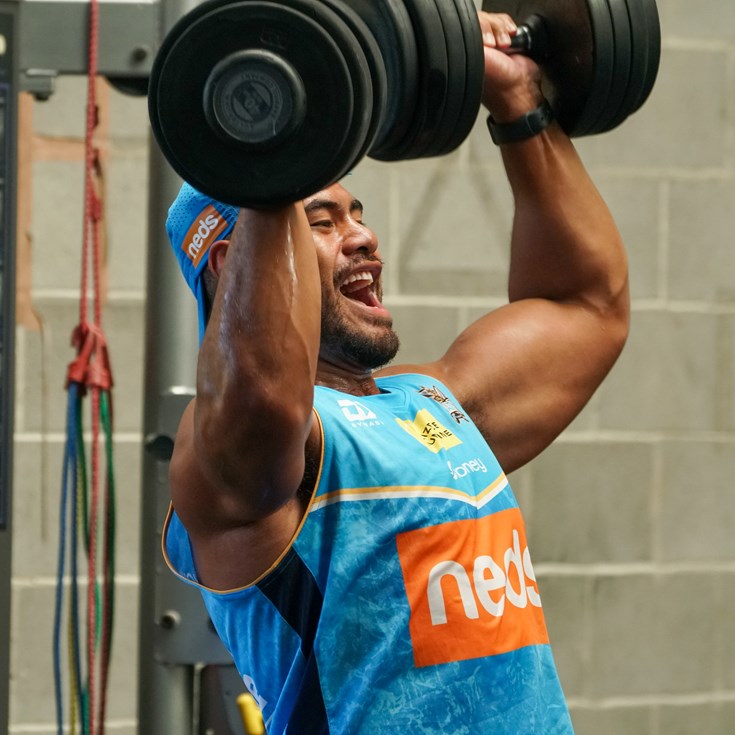 Marzhew v Meaney in a battle of the wingers