The crude Taliban created bomb may have robbed Curtis of his legs, however it also fuelled the New Zealand born Australians desire to challenge himself and to achieve excellence.

Less than two years later, McGrath had claimed the first of multiple Paracanoe World Championship gold medals and was well on his way to realising his Paralympic goal where he won Gold in the 200-metre sprint at the Rio Paralympics, the Gold Coaster named as the Australian team flag bearer in the closing ceremony.

Fast forward to Gold Coast 2018 and while Curtis is preparing to represent Australia at the World Championships in Portugal later this year, he's recently spent two weeks covering the Commonwealth Games as a commentator with Channel Seven, hailing the games which saw able and disabled athletes compete side by side an amazing and motivating success.

"Some amazing feats, overcoming their adversities, especially in the triathlon, there was one athlete in particular Lauren Parker who really showed what it was to overcome a disability and really shone above all else and it was really special to witness that and got a chance to interview her as well which was a very memorable part of my time"

"There have been a lot of positive feedback about that aspect of the Comm Games, them competing together and being a part of the one team as they said and I think that was a really important step towards progression and recognition of disability and recognition of the effort with which a disabled athlete really puts forward to become elite in their field and in their class and so it was nice to see it on an even playing field and nice to see it broadcast around our nation"

A veteran of three INVICTUS GAMES events, Curtis has withdrawn from the Australian Wheelchair Rugby team to take on an ambassadorial role ahead of the 2018 event in Sydney.

When he's not training or presenting with Queensland weekender, Curtis is in constant demand from sponsors and the broader business world as a guest speaker... he also works tirelessly with returned service personnel... recently sitting for a new Australian Military exhibition with a theme very close to his heart.

"There is a new exhibition opening up in October which will be exciting to be a part of with some other wounded, injured and ill veterans and it will be nice to have that open at the War memorial"

On Saturday evening Curtis performed various roles during the TFH Titans ANZAC Round celebrations, the decorated servicemen thrilled to see so many paying their respects pre and post-match.

"It's nice to be recognised, it's nice to have a national sporting code that is in the top tier of our nations sporting codes recognising the efforts of our service men and women and to be here in front of twelve and a half thousand fans, it's really nice for them to be silent for that moment"

Speaking on Titans TV and in the Corporate functions pre-match, Curtis also had the honour of presenting the man of the match with the official ANZAC Round medallion.

That was a pretty special moment, the ANZAC Day or ANZAC Round man of the match, nice to recognise that"

While the Sharks claimed a thrilling one-point win, it was the Titans who presented Curtis with a signed jersey certainly claimed a new fan.

"I actually went to a Gold Coast Chargers match way back in the day, so it was one of the first NRL events that I ever went to so yeah, I'm part of the family"

It's safe to say, Curtis now also has a new army of supporters. 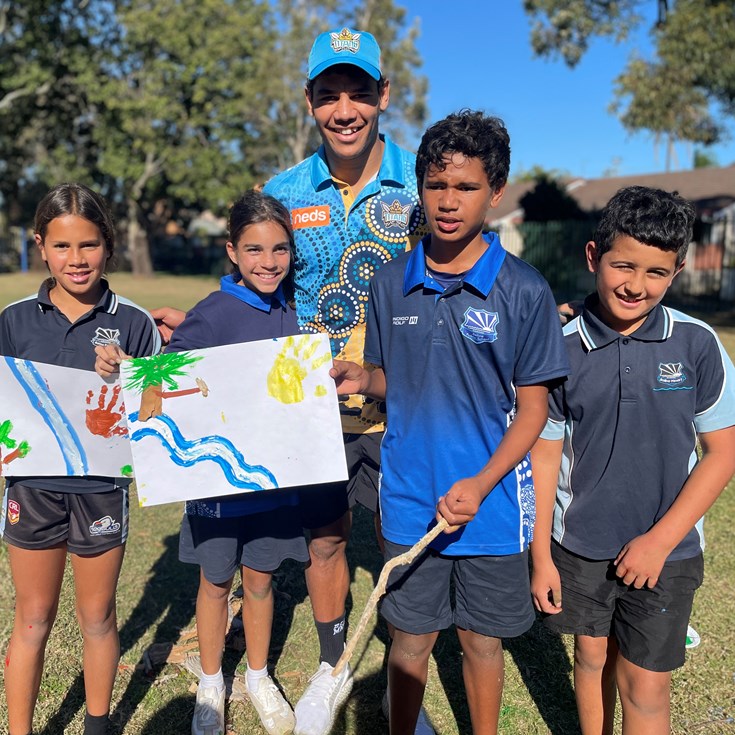 The journey of Sarah and Marcus

Titans Together driving participation in region

Titans to wear Indigenous Jersey for Inspire Round