The Ken Stephen Medal recognises the efforts of an NRL player who has not only achieved on the field but has also committed time off the field to community projects.

The local junior came into first grade in 2010 and after spending time with his idol Preston Campbell, he wanted to follow in his footsteps and give back to the community that has been home for him his whole life.

When James speaks about Preston, he struggles to not get emotional.

"For such a little guy he has made a big impact on this community," he says.

The Bilambil junior spreads his time across many different community projects but it's his time spent as a Starlight Foundation ambassador, at his junior club or old Primary School and any indigenous program the Titans align themselves to, he is ready to go.

"It is good to give back, especially to where you have come from," James says.
"Bilambil is not a big town and only a couple of players from the area have made first grade, so to help them out and hopefully be some sort of inspiration to the kids there; it's great.

"So if I can bring some joy to kids who are just like I was there, it gives me a lot of joy too."
It's easy to see where the 27-year-old gets his community minded spirit from with his parents volunteering locally for a large part of their lives.

"Mum has volunteered at the Jets for about 30 years, she loves the club, and Dad does too, and I always appreciated what they do.

"Playing professional footy is a pretty easy job really. We are in a privileged position – you play footy for a living.

"I never lose sight of that, and if I can use my profile to help others, I'm privileged to be able to do that."
James's connection with the Starlight Foundation came from an experience which is typical of the Titans skipper.

It was in 2015 when the family of wheelchair-bound 13-year-old Harrison Wheatley came to the perimeter fence after a match asking if James could look up at Harrison, who couldn't get to him, and wave.

James did more than that. He jumped the fence, went to Harrison, gave him his boots he'd just worn, and posed for a photo with him.

Someone else witnessed the event, posted a photo on social media and it went viral. When James found Harrison had had a cervical spine disorder since he was a toddler but was going to walk Brisbane's City2South fun run (with assistance), he sprang into action.

He had been considering cutting his long locks for his upcoming wedding, so it was arranged to seek sponsors and all funds went to Harrison's fund-raising for the Starlight Foundation.

Soon after, the connection between James and the Starlight Foundation developed further and now he is proud of his ambassador role.

"When you have children of your own and you do things for the Starlight Foundation and see kids who are pretty sick, you are extremely thankful that your own kids are healthy and realise how lucky you are," said the father of two.

James is the Gold Coast Titans' third winner of the Ken Stephen Medal after Preston Campbell in 2008 and Luke Douglas in 2015. 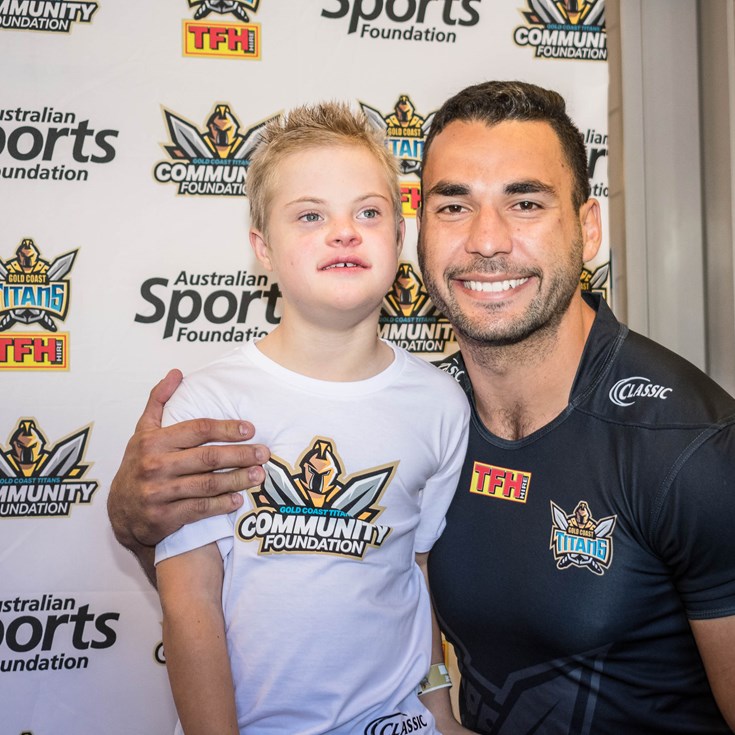