Young half Jake Clifford made his case to partner Michael Morgan in the Cowboys halves with a star showing in the 22-16 trial win over the Titans on Saturday.

Cowboys coach Paul Green has stated his intention to start with Te Maire Martin alongside Morgan in round one but Clifford did his claims no harm with a three-try, 18-point display in front of a record Sunshine Coast crowd of 10,680.

North Queensland rep stars Matt Scott, Jason Taumalolo and Jordan McLean each blew out the pre-season cobwebs with a 20-minute hit-out to start the game as those on the fringe of first-grade selection tried to impress.

They all came through unscathed but three of their teammates weren't as fortunate.

Powerful winger Murray Taulagi is likely to miss the start of the NRL season after he suffered a medial ligament to his left knee in the 31st minute while front-rower Corey Jensen will be assessed after leaving the field with an ankle injury midway through the second half.

Taulagi's replacement, Kurt Wiltshire, also had to be replaced 14 minutes from full-time with what appeared to be a right ankle injury.

Remnants of Cyclone Oma put a strong southerly at the back of the Titans in the first half which caused havoc for the Cowboys' kicking game.

Both Clifford and Martin struggled with last-tackle options due to the conditions but produced all of their side's four tries when they decided to run with the ball instead.

After a slight juggle Clifford pushed through two Titans defenders close to the line to open the scoring in the 18th minute, taking advantage of a rare repeat set.

The Titans seemed destined to score until a Bryce Cartwright flick pass fell into the arms of Cowboys winger Murray Taulagi to put North Queensland in position to score first.

A Cartwright tap-back inside from a Tyrone Roberts shift to the left put Titans fullback Jesse Arthars across for his first try in club colours but their 6-4 advantage would not last long.

Clifford used the wind to his advantage to earn possession back for the Cowboys from the kick-off, Martin slicing through four minutes into the second quarter for a 10-6 lead.

North Queensland lost Taulagi in the 31st minute to a leg injury and five minutes later Gold Coast hooker Mitch Rein exposed a lapsed ruck defence to level the scores at 10-10 at the main break.

Clifford broke the deadlock with his second try of the night, pouncing on a Tyrone Roberts kick that went nowhere and racing 75 metres to score.

Titans prop Leilani Latu then barged his way over from close range seven minutes from full-time.

Clifford's third of the night three minutes later gave North Queensland a six-point lead before Titans replacement Christian Hazard held up over the line in the final play of the game.

Minus a majority of their regular first-graders, the Titans had plenty of willing workers with hooker Mitch Rein, prop forward Moeaki Fotuaika, centre Brian Kelly and fullback Jesse Arthars all impressive.

It was a largely positive night for back-rower Bryce Cartwright who will come into contention for the left back-rower spot in round one if captain Ryan James can’t recover from a knee injury in time.

A flick pass that led to the Cowboys’ first try was a lowlight but Cartwright showed a willingness to engage defensively and provided a classy touch for Arthars to score in the first half. 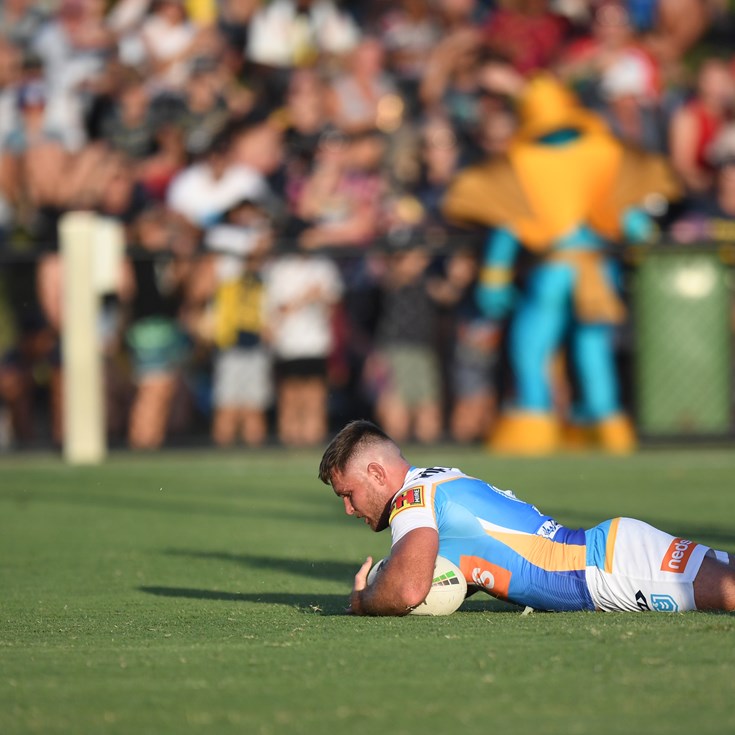