Tyrone Roberts expects to see star half Ash Taylor back in Titans colours sooner rather than later, revealing his request for leave to address personal issues was "a long time coming".

Roberts and Taylor have been inseparable since the young halfback joined the club at the end of the 2015 season, the pair remaining in regular contact during Roberts's one-year stint with Warrington in the English Super League.

Last Thursday, Taylor requested leave to take time away from the game as pressure continued to mount with fans, commentators and the media taking aim as his on-field struggles mirrored that of the team.

Many saw his decision not to take a shot at penalty goal late in the 6-4 loss to the Cowboys as proof his confidence was at a career low but Roberts hinted it merely compounded issues he was facing away from the game.

"I talk to him every day and he tells me everything that's going on. It's not just been the last week, it's been a long time coming,” Roberts said after leading his team to an upset 26-18 win over the Broncos on Sunday.

"There was a lot of pressure on him and it does take a toll on you mentally. I've been in that same situation so you've got to give him that space, let him go and hopefully he comes back strong and ready to rip in.

"All he wants to do is play football. That's all he wants. He gets all this outside stuff that's coming in and people talking about him. At the end of the day that stuff does take a toll on you because you're representing not only yourself but your family and your friends.

"It's a great time just to step back and get his mind off all the stuff that he can't control. That's what he's doing ... It's the only way you can move on.”

In Taylor’s absence, Ryley Jacks was called into the team to play his third game of the season and proved an ideal foil for Roberts.

The former Storm half made 37 tackles and provided a more direct approach for the team's attack, digging deep into the line and taking a barrage of heavy hits before passing to his outside men.

Although somewhat uncomfortable with regards to the circumstances of his call-up and the concern for Taylor’s well-being, Jacks said he was simply focused on making the most of the opportunity to add to his NRL tally.

"It’s so strange. I only found out on Thursday so my mindset was on playing at Piggabeen against the Falcons," said Jacks, who has been a key player in guiding Tweed Heads into a good position in the Intrust Super Cup.

"On Thursday I went in and Garth [Brennan] told me that I’d be playing so your mindset has to change straight away.

"By Thursday night I knew what I was doing and then it’s all go from there. It can rattle you a bit but I’ve got used to it over the last couple of years.

"I hadn’t played in about 10 weeks so the pace of the NRL is just ridiculous compared to Queensland Cup. I was a bit out on my feet there at the end but I think I’ll be better for it."

Jacks will almost certainly get a second opportunity alongside Roberts against the Warriors on Friday night at Cbus Super Stadium.

"All we said was that rugby league is a simple game. You go out there and compete for 80 minutes and you put yourself in the game,” Roberts said of the team’s pre-game commitment against Brisbane.

"We know that if you're in front, teams are going to throw the ball around. You've just got to keep competing and shut it down and do the little things right." 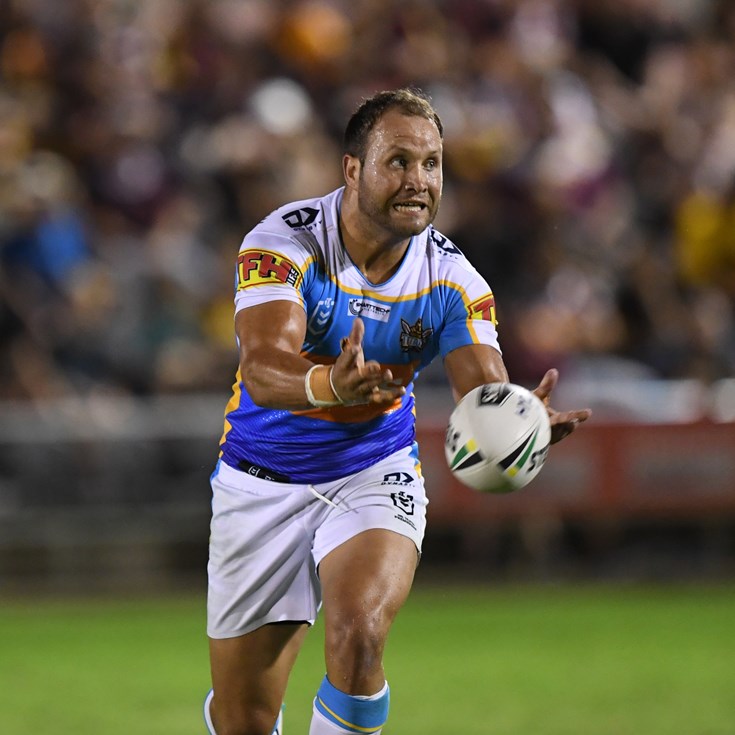 Roberts: Fatherhood can be the making of my mate Ash

Cavalry arrives for Gold Coast as Taylor and Tyrone reunite