The Titans have dominated the Queensland Derby with the North Queensland Cowboys, running out 44-8 winners in Townsville.

Phil Sami was slippery in the centres – he had five tackle busts through the first 20 minutes and was elusive with every touch.

David Fifita was dangerous, fending players and busting tackles.  AJ Brimson and Tyrone Peachey were threatening with their speed through the middle.   Mitch Rein’s service out of dummy half was superb and Jamal Fogarty pulled the strings with aplomb.

The start didn’t go to plan, with Patrick Herbert booting the ball out on the full off the kickoff.

With the Cowboys in attack early, strong goal-line defence kept the scores level and the Titans capitalised when given the opportunity at the other end of the fiend.

The first try came through some brilliance from AJ Brimson.

The ball hit Anthony Don on the right edge, with the winger passing back inside to Brimson who grubbered through into the in-goal.  Don and Brimson chased hard and it was the fullback who was able to dive on his kick to give the Titans first points.

Sami stepped his way past defenders to give the Titans their next scoring chance 10 minutes later, finding Tino Fa’asuamaleaui who ended up dropping the ball ten metres out from the Cowboys line.

Starting the game in the front row with Moeaki Fotuaika moved back to the bench (Tyrone Peachey started at lock), Fa’asuamaleaui made up for his error with a try-saving tackle on his own line a few minutes later as the Cowboys threatened to score.

After holding the North Queenslanders out, the Titans went back into attack and it was Brimson who linked with Sami for the Titans second try.  Brimson went to the short side and hit Sami with a short ball close to the line, with Jamal Fogarty converting to make the score 12-0.

The Cowboys appeared to have scored, when Jake Clifford crossed, however the try was reversed.  Clifford gathered possession in an aerial contest with AJ Brimson, with commentators questioning whether the Titans fullback was tackled in the air.  The referee ruled that play was ok, however the review revealed the Clifford had dropped the ball over the line.

A beautiful left side play gave the Titans their next points.  Mitch Rein threw a great ball to find Phil Sami, with the centre drawing and passing for Corey Thompson to cross at the 32nd minute mark.

After 47 games, Moeaki Fotuaika crossed for a try, with the prop barging over close to the line.

Leading 26 points to 0 at the break, it was the Cowboys who fired first in the second half.

Hamiso Tabuai-Fidow crossed in the left corner for the home sides first points.

The Titans attack fired again soon after, with quick hands through the centre of the field finding David Fifita who in space, hit Phil Sami.  The centre kicked back in-field and managed to score a goal-line dropout.

The dropout bounced on it’s point, with Jake Granville outjumping AJ Brimson and Jamal Fogarty to re-gain possession for the Cowboys.

After a 10 minute grind, it was the Titans who scored next.

Erin Clark hit Jaimin Jolliffe with a beautiful ball, with the Wagga Wagga wrecking ball enjoying open space before finding AJ Brimson back on the inside who raced away to score.

It was a quick-fire return from the Cowboys, with Murray Taulagi scoring in the 57th minute.

Erin Clark hit Jaimin Jolliffe with a beautiful ball, with the Wagga Wagga wrecking ball enjoying open space before finding AJ Brimson back on the inside who raced away to score.

It was a quick-fire return from the Cowboys, with Murray Taulagi scoring in the 57th minute.

Taulagi looked to have scored again, however the referee ruled that Corey Thompson was blocked when trying to cover in defence.

In the next set, the Titans scored.  Tyrone Peachey threw a dummy at the line, busting through and finding the second rower who scored in consecutive games.

The final try would be a double to Corey Thompson and see the Titans score one of their most emphatic victories in club history. 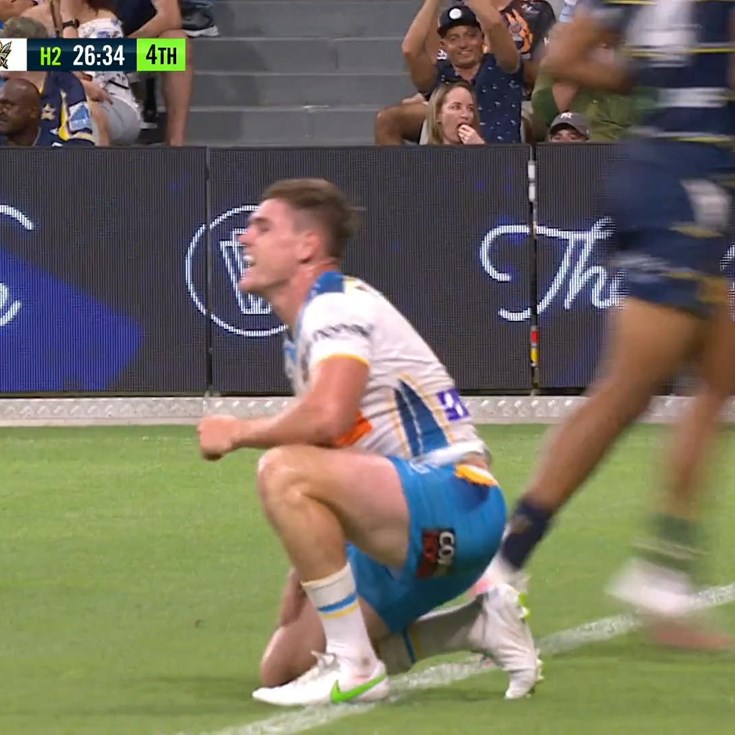 Fifita continues his try-scoring form in 2021

Thompson finishes with a double

Brimson does it all himself