The NRL Telstra Women's Premiership is set for the biggest recruitment shake-up in its four-year history with the planned talent equalisation model set to have an impact at all six NRLW clubs.

And after the successful cross-code switches of rugby sevens stars Charlotte Caslick, Ellia Green and Evania Pelite last year, bringing them back to the NRLW for the seven-week competition also remains a genuine possibility in 2021.

With the Tokyo Olympics set to wrap up on August 8, NRL.com understands there has been some early talk of rugby sevens talent backing up following the Games.

NRL CEO Andrew Abdo confirmed a centralised contracting system would be introduced for the NRLW this year with clubs set to have around a month to finalise their rosters before a short pre-season begins for most squads in mid-July.

NRL.com understands the centralised contract system will start with an elite group of 30 players from across Australia and New Zealand, which could also include some of the cross-code names, set to be spread across all six NRLW teams.

It's understood four players from the top 30 will each be allocated to every NRLW club, including newcomers Parramatta, Newcastle and Gold Coast, after collaboration between with the clubs, player and NRL.

Everything you need to know about the NRLW

An NRLW club will then be able to negotiate and recruit a fifth player from the remaining six available in the top 30, which could include a player who knocked back the NRL's recommended allocation.

It's understood the majority of players in the current top 30 have agreed to terms with NRLW clubs and their signings could be announced in the lead-up or after the Ampol women's State of Origin on June 25.

There is also a possibility a freeze on contract talks could come into play from next week in a bid to allow players competing in the major Origin event to focus on their state duties.

Once the top 30 is finalised across the game, the remaining NRLW hopefuls will go into a free agency pool, where clubs can look to build their squads in the coming weeks.

The top four players at each club are in line to earn up to $28,000 for the competition in one of the largest pay increases in the women's game.

The fifth player's contract is negotiable with each club, while players in the free agency pool stand to earn between $8000 and $16,000.

The additional cash incentive for the game's biggest stars is there to encourage marquee players to earn more money by joining a rival NRLW club that has a top-five spot available on the roster.

It's understood several New Zealand representatives, many of whom missed last year's NRLW competition due to COVID-19 restrictions, remain open to joining one of the six teams in Australia.

Warriors captain Georgia Hale, who has been based in Australia this season, is expected to join the Titans after the New Zealand club confirmed its withdrawal from the competition last week.

Hale's Warriors teammates Crystal Tamarua, Tazmin Gray and Karina Brown are also likely to sign with the new franchise, who will be coached by former Roosters coach Jamie Feeney.

Defending premiers Brisbane are preparing to fly in powerhouse forward Amber Hall from New Zealand for a third season after her match-winning efforts in recent years.

The Broncos face a challenge to keep most of their premiership-winning squad together with several players facing the prospect of forgoing marquee money in order to remain at the club.

The Roosters are preparing for plenty of firepower in their forward pack to depart with the Eels closing in on several players who hail from the western Sydney region.

St George Illawarra are also resigned to losing some of their star-studded squad from last year with the Tricolours and Newcastle monitoring the situation closely.

Dragons captain Kezie Apps is expected to stay on in the Red V but the futures of golden boot winners Isabelle Kelly and Jessica Sergis at the club are clouded.

It's understood the Knights, who will be coached by Blake Green, have struggled to immediately attract marquee players to the club compared to the Eels and Titans.

However, the NRL remains confident of resolving the problem in the coming weeks.

We've all seen and heard the footage of Billy Moore yelling "Queenslander" in the 1995 State of Origin series and now the Maroons women's side are encouraging the same next Friday night – with a twist.

Maroons stars Ali Brigginshaw, Tazmin Gray and Julia Robinson have taken part in a "Queenslandher" campaign in the lead-up to Ampol Women's State of Origin next week.

The campaign is in partnership with the QRL and Health and Wellbeing Queensland, in a bid to support all Queenslanders with their physical activity, nutrition and wellbeing needs.

Brigginshaw encouraged Maroons fans attending to add the extra 'h' when supporting the side in their quest to make it two wins in a row and retain the shield at the venue.

"The heart of our chant stands for something so much greater than a single sporting moment," Brigginshaw said.

"It's a message for every young girl who's dreamed of playing rugby league. You can make it to the top. You are a 'Queenslandher!''

NRL officials remain confident the match will go close to selling out with ticket sales strong in the lead-up to the game.

Origin eligibility gets a refresher

Still on State of Origin and eligibility always gets brought up at this time of the year and for the women's game the debate has been no different.

Previously, players could be selected based on where they lived, allowing New Zealanders Nita Maynard and Maitua Feterika to play for NSW and Queensland respectively in 2018.

However, the tightening of the rules changed in 2019 with both players rubbed out.

This is a Rivalry that knows no boundaries

Maroons 19th player Rona Peters successfully received an exemption due to her Kiwi Ferns career ending in 2015, but is no certainty to play this year due to injury.

NSW player Botille Vette-Welsh was born in New Zealand but pledged her allegiances to Australia in 2019, while Simaima Taufa was raised in Auckland before moving to Sydney at a young age.

Maroons pair Tarryn Aiken and Chelsea Lenarduzzi were both born in NSW but didn't play their first senior rugby league until they moved to Queensland.

Aiken is now based at Tweed Heads and despite representing NSW in touch football at a school level, she's always classed herself a Queenslander.

"I played for the Wyong Roos but moved to the Gold Coast when I was seven," she grinned.

"I've always been a Maroons fan growing up and a Storm fan, I loved watching Billy Slater play. I'm a Queenslander."

Lenarduzzi grew up in Moss Vale in the southern highlands of NSW but moved to Queensland in 2015, where she began to take up rugby league with Burleigh.

The Rabbitohs have signalled their intentions to field an NRLW side in the "not too distant future" after announcing they'll have teams in the Lisa Fiaola Cup (under 17s) and Tarsha Gale Cup (under 19s) in 2022.

After missing an inaugural NRLW licence in 2018, plans are now falling into place for the club to build their women's program back up in time for when they enter into the main competition.

Their Harvey Norman NSW Premiership side started the season slowly but have strung together three wins over the past month.

Meanwhile, Newcastle have confirmed they'll also will field a side in the NSW competition next season to go with their Tarsha Gale Cup program.

Women’s Origin tickets are on sale via NRL Tickets. Supporters can watch the historic match from just $5 for juniors, $15 for adults and $35 for families. 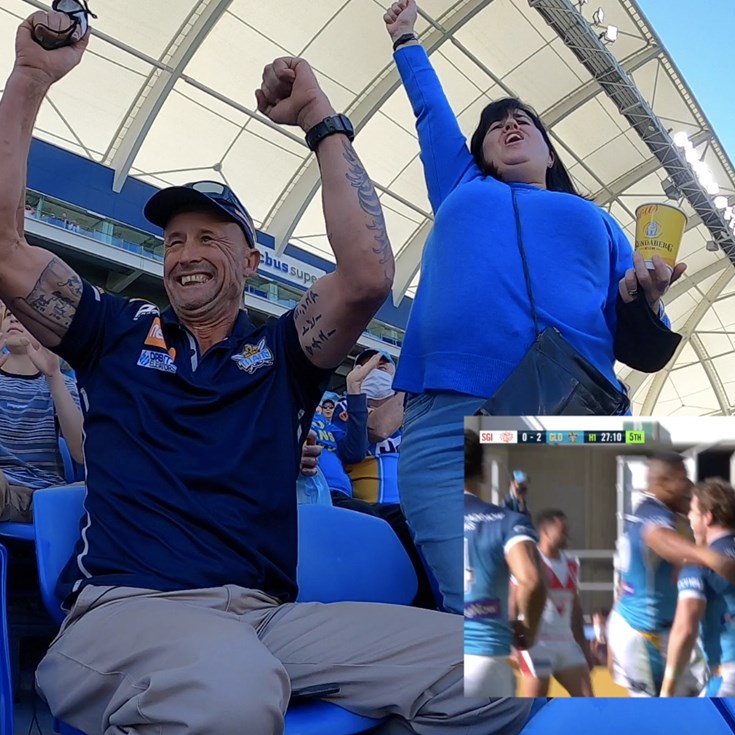 Presented By Village Roadshow 16 hours ago

Herbert has charge downgraded at judiciary