A stirring 28-point win over the Bulldogs has propelled the Titans from 11th spot into the top eight - and they have every intention of staying there.

They remain Queensland's only hope of having a team in the 2021 finals race but that's not going to draw any empathy from the Cowboys in this intrastate derby.

Todd Payten's men are facing an eighth straight defeat if they cannot lift against their southern cousins.

The last three losses haven't been savage - 16 points to the Roosters, four to the Storm and 19 to the Broncos. But it's been enough to snuff out their hopes of a top-eight finish.

Meanwhile, the Titans missed the finals by one spot in 2020. Their last campaign was back in 2016 and they're not willing to let 2021 get away from them.

Titans: In a repeat of previous weeks, the Titans announced an hour before kick-off that Beau Fermor will start the match and David Fifita will be on the interchange bench.

Apart from that, the Titans are 1-17 with Esan Marsters the 18th man.

Jamal Fogarty (finger) was a chance of returning will now look at a round 22 return.

Erin Clark (elbow) is good to go and Patrick Herbert returns from suspension.

Sam McIntyre and Anthony Don dropped off the reserves list 24 hours before kick-off.

The Titans are aiming for two wins in a season against the Cowboys for the first time since 2012.

Valentine Holmes (shoulder) returns at fullback and coach Todd Payten said the Maroons winger will play through the pain barrier for the remainder of the year.

With winger Kane Bradley (fractured hand) set to miss the remainder of the season Ben Hampton goes from the interchange to the centres and Murray Taulagi shifts to the wing.

Francis Molo and Peter Hola were omitted from the extended bench on Saturday.

Cowboys winger Kyle Feldt has scored five tries in his past six games.

Moeaki Fotuaika v Jordan McLean: Fotuaika can now count himself among the game's best props. If the Cowboys are to end their losing streak, McLean needs to take on the Titans forward leader. If not the likes of David Fifita and Tino Fa'asuamaleaui will come into their own.

The Cowboys’ defence has been one of the main reasons for their losing record this year. They’ve missed 35.5 tackles per game, only Cronulla have a worse record, and North Queensland racked up 41 in last week’s loss to Brisbane. 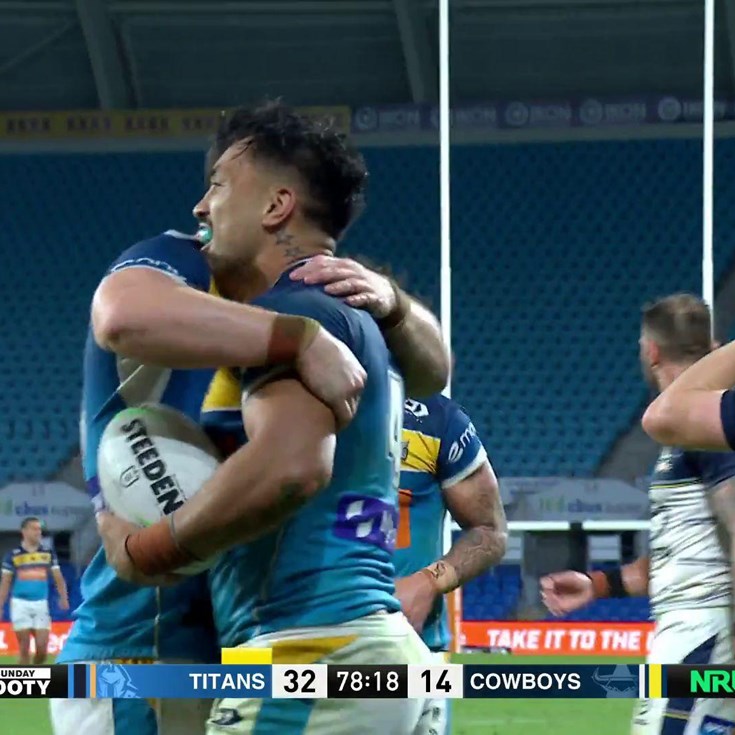 Herbert shows his skill to score late for the Titans

Fermor gets his turn to score

Fermor with a pass you have to see to believe

Brimson never gives up on the play