Ryan James hangs on to a memory of the Titans "glory days" which he insists the club can recreate under new coach Garth Brennan after missing the finals for six of the past seven seasons.

The 26-year-old forward was signed as a teenager and identified early in the club's history as a player to build a bright future around, and James now believes the time for that hope to be realised has arrived.

If teams do beat us I want them to say 'gee it was tough beating the Titans'.

He has seen the tough times at the club, but now insists they are about to end.

"When I started at the Titans it was the glory days. I debuted in first grade in 2010 when we were one game off making the grand final," James told NRL.com.

"I hold onto those feelings. You can't let go of them. Back then there was that great feeling on the Gold Coast where everyone was behind us, before it all went on a downward spiral.

"Now, I think Garth Brennan has been a great addition and everyone he has brought on board is positive.

"The 2009 and 2010 teams that made the finals were tough to beat. If teams do beat us I want them to say 'gee it was tough beating the Titans'. I think we can really get back to that and push for the finals in 2018. Everybody says that, but I believe it really is achievable."

When James outlines why that is the case the reasons roll off his tongue.

He points to the extra funds in the salary cap that are now available with Jarryd Hayne's exit. He points to the recent signing of fullback Michael Gordon and how "the prospects we have coming through look good, and the local juniors we have brought back to the Gold Coast like [props] Keegan Hipgrave and Jai Whitbread have been good buys".

Whitbread impressed in his Titans debut in the final Telstra Premiership round game of 2017 while Whitbread joins a forward pack James said boasted plenty of quality.

"Jarrod Wallace just had his best season of first grade and deservedly got his Origin jersey," he said.

"Kevin Proctor was a great buy and one of the most important. He's brought a lot to us from the Melbourne system, and he is another local product who has come back.

"In Nathan Peats we have a real competitor. Mitch Rein is winning most things at training at the moment so now we have got two really good hookers.

"I got to play with Leilani Latu in the Indigenous All Stars and he is a great buy, a ball playing front-rower and quite skilful.

"We have a utility in Karl Lawton who can play anywhere from fullback to second-row, so the club is heading in the right direction."

James said he would captain the club again in 2018 if Brennan wanted him to while putting up his hand to move out wider and play as an edge back-rower and reignite his 2015 combination with five-eighth Kane Elgey.

"[The captaincy] is something that I have enjoyed doing," he said.

"I haven't spoken to Garth about that yet, but it is tough when you are not on the field for the whole time so that is something we will have to look at if I play front-row or second-row.

"I wouldn't mind pushing back out to the left edge with Kane Elgey.

"That is where we played in 2015 and we had a solid year together. I'd love to get back out there with him."

Memory is a powerful thing and for James it contains the reasons why he re-signed with the Titans until the end of 2020 and intends to finish his career at a club he wants to be successful.

"I am a local junior and I remember watching the Titans run out for their first game in 2007," he said.

"Then I was able to run out alongside some of my childhood heroes like Scott Prince, Luke Bailey and Preston Campbell.

"My heart is with the Gold Coast. My family gets to watch me every second week and my kids are going to watch me play for the team I love.

"I debuted when I was 18 and I am 26 now. I've got another three years to go here, and one more contract after that and it would probably do me.

"I want to stay around and make this a very competitive and marketable side for the Gold Coast because everyone has put in too much hard work over the last 11 years for it to go belly up.

"This place means so much to me. I would love nothing more than for the Titans to be a successful football team." 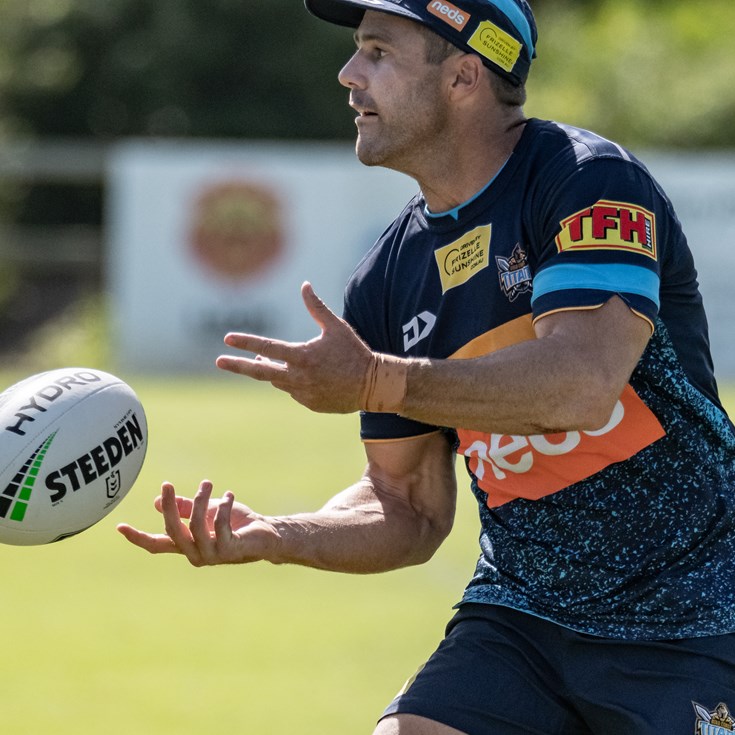