Will Matthews returns to the Titans

Amid all the obvious angles surrounding Bryce Cartwright's shock release to the Gold Coast Titans – redemption, his affinity with coach Garth Brennan and the four-year gamble on an unfulfilled talent – one thing that has been overlooked is just how he could be their much-needed missing link.

Cartwright, at 23 and with just 69 NRL appearances under his belt, has "deficiencies" according to rookie coach Brennan, but he also shapes as the X-factor in what Brennan is trying to create at the most significantly rebuilt team in the Telstra Premiership.

And that's what excites the new coach as much as anything: Cartwright's place in his plan to "play exciting football".

"I am a coach who likes to entertain, to see my teams play some football. I'm not predominantly based on statistics. Rugby league is in the entertainment business, we need to entertain.

"With all due respect, some teams are boring to watch. Guys like Bryce are going to make some errors but he's going to do some things where people will think 'wow, where did that come from'. That's the sort of player he is and that's what I'll expect from Bryce.

"We're going to play some footy, without being silly with it. It's important that we get the players who can play that style of footy though – that's entertaining to watch but also entertaining and rewarding for the players to play.

"He can create, he's got a skill level I haven't seen in too many players I have coached. We're a young squad that is building and he adds to what I'm searching for."

Brennan said other teams were "a lot more structured and sterile" than the Titans last year, adding he had enjoyed watching them play.

"They certainly showed they had some flair about them with Ash Taylor, Tyrone Roberts and Kane Elgey in the halves. Other teams don't have that," he said.

"However, we will move the football a little bit more than what the team has in the past."

Brennan's predecessor Neil Henry had had to mould a team based largely on enthusiasm and commitment and good go-forward, and had success in 2016 when, against all predictions, the Titans made the finals.

With all due respect, some teams are boring to watch. He’s going to do some things where people will think ‘wow, where did that come from’.

What they have lacked compared to the top teams has been attacking firepower with the ball in hand.

They have rated in the bottom half of the competition in offloads and in the past two seasons have relied heavily on scoring from kicks once they work into the opposing team's quarter – being third in the NRL in both seasons, with most from the boot of Taylor.

Those who have typically led their second-phase – Zeb Taia (in 2016), Agnatius Paasi and Leivaha Pulu - have departed, leaving, incredibly, halfback Taylor as the best offloader of the remaining Titans.

In his breakout season of 2016, Cartwright cast off an incredible 77 offloads in 26 games, averaging nearly triple of the best second-phase exponents the Titans have had in recent seasons.

The signing of Cartwright, the switching of Ryan James to the left edge where he began to develop a dangerous combination with Elgey in 2015 before heading back to the front row, and the options of big-bodied hole runners Kevin Proctor and Joe Greenwood, is set to give Brennan the personnel to play the style he wants to embrace.

It's alright talking the talk with attacking style but to walk the walk, you must have the cattle. And that's the question surrounding the club.

They will field the least experienced pack in the NRL with just Kevin Proctor (195), Mitch Rein (137), Nathan Peats (118) and Ryan James (115) having played more than 100 games, with Queensland representative Jarrod Wallace next on 94.

They will have big, mobile hole runners around Cartwright in 110kg English international Greenwood, who showed potential on the left side last season but will most likely move to the right, Kiwi international Proctor (106kg) and James (11kg).

The Titans of 2018 might just have the ammunition around the edges they have lacked. 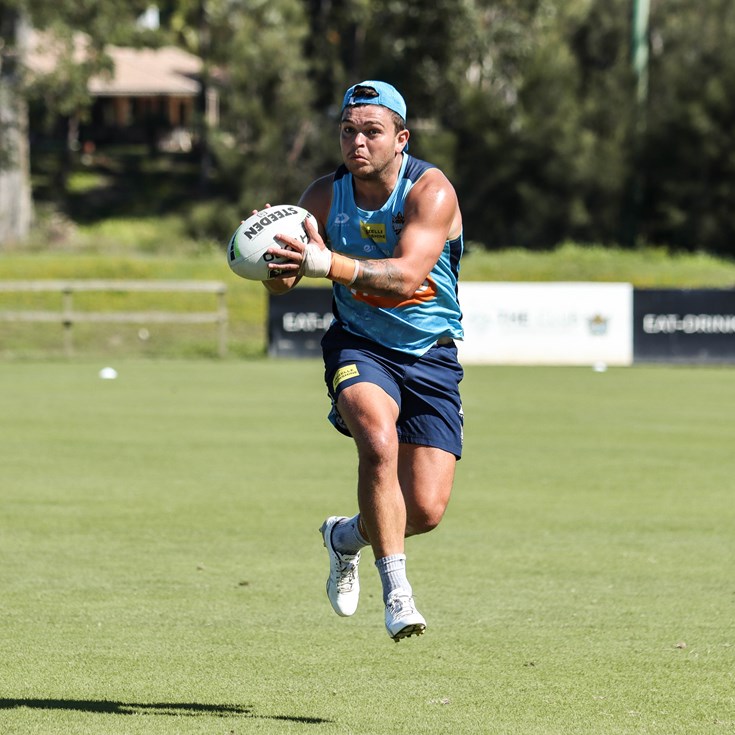 James confident Titans can get back to glory days