Garth Brennan insists Tyrone Peachey's arrival at the Gold Coast Titans is set to take the heat off star half Ash Taylor and give the team another match-winning option in attack.

Taylor and fellow game breaker AJ Brimson agree with the coach's assessment and Peachey's attacking record in 2018 for the Panthers backs up that view.

Those statistics would have put Peachey in the top three of all four attacking indicators had he been playing with the Titans.

Asides from those compelling numbers Brennan said Peachey was "a game breaker" who would take opposition's focus away from Taylor.

"Tyrone won games for Penrith on his own last year. He changes games. That is where he will take the pressure off Ash," Brennan told NRL.com.

"Whenever we got in a tight game last year everyone looked to Ash and it was a case of 'Ash get us out of this' or 'Ash win us the game', whereas Peachey is a current Origin player and was in the Australian squad in New Zealand.

"He is a winner, he's been training the house down and he is great around the squad with his presence. It is a major coup for the club to have him on board."

Taylor had 17 try assists for the Titans last year which put him well ahead of his next best teammates – Kane Elgey and Brenko Lee both on six – but 16 of them were in the opening 14 games. When Taylor didn't lay a try on there wasn't a lot of help, but the man himself said that was about to change.

"Peachey is such an attacking weapon and a threat to the line every time he takes it on so it is great to have someone like him out there to get us on the go-forward and to take the heat off me when I need it," Taylor told NRL.com.

"He's played five-eighth before so he can read the play and understands the game as much as I do. I can't wait to see him in the colours."

Brimson calls Taylor "the money man", but said Peachey's arrival would give the entire side another clutch play exponent to feed off and follow.

"He looks like he is just bringing a lot of energy so far at our training. He likes drifting across field and picking up runners, or he will just take off," Brimson told NRL.com.

"It gets the team on the front foot and people have got to push into holes off him. He is a very confident player and creates things out of nothing, so I will be looking to pretty much follow him around."

Peachey could be utilised at centre or five-eighth by Brennan. Either way, Taylor said the presence of more quality halves had made him lift his own intensity at training.

"Ryley Jacks is a great player and has come from a great system at the Storm. Tyrone Roberts is there. AJ is there. Peachey is there," Taylor said.

"We have four regular starters who could lead this team around.

"That has given me a boost to perform at training, let alone the trials. I have to step up and show my class and my experience."

Taylor is on modified training for three weeks after having minor shoulder surgery but is expected to be fit to play the Broncos on March 2 in the Titans final trial. 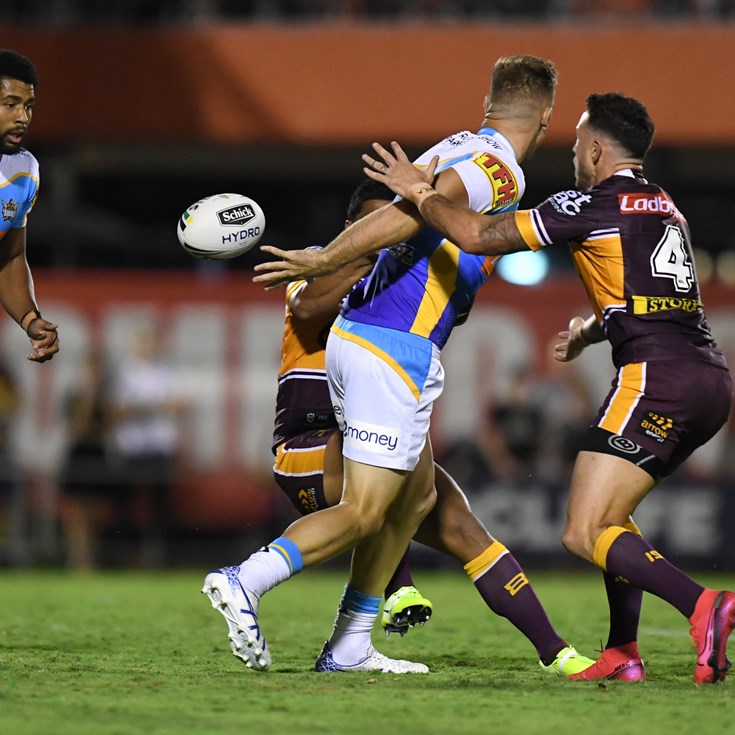