The Titans have played finals football just once in the past eight seasons, but after having gone to the market to purchase genuine attacking weaponry there is belief that a new horizon dawns.

Gold Coast coach Garth Brennan has secured a one-year contract extension and will be at the helm until the end of 2020. He has a short window to get the Titans back to the standards set by the genuine premiership contending sides of 2009 and 2010.

Plenty. The recruitment of match-winning NSW Origin representative Tyrone Peachey and giant former Canberra prop Shannon Boyd, along with the return of the already in-form Tyrone Roberts gives the Titans strike, size and experience in key positions. Brennan was without halves options in 2018 but Roberts' return and the recruitment of former Melbourne half Ryley Jacks has solved that issue.

The presence of Roberts and Peachey will also take some of the pressure off half Ash Taylor.

"Boyd has played for Australia, Peachey in Origin and Tyrone Roberts was excellent for us in 2016 when we last played in the semis.

"They are all mid-way through their career and add the experience that this team needed."

Away from the playing arena the Titans have also secured Kangaroos coach Mal Meninga as head of performance and culture, a massive coup that will give the club more cohesion and lift standards across the board.

When you are a club that has regularly missed the play-offs, the draw inevitably pits you against teams that have finished higher in the past, so there are plenty of danger games looming for the Titans. They play just one game at home in the opening month, against the Raiders, before three testing away trips against the Sharks, Rabbitohs and Warriors. Chalking up some road wins early will be vital to giving the side belief.

The Titans play twice against six of the sides that finished in the top eight last year and once against the Rabbitohs and Roosters so there is nothing easy about their draw. If Brennan's men return to finals footy, they will have earned it. James said he wouldn’t have it any other way.

"We've had a look at the draw and you can’t do anything about it, but it will be fine for us because we seem to play better against the best sides," he said.

"The draw could end up being a good thing for us."

Stat to give you hope

There weren't many statistical highlights for the Titans in 2018 so finding one wasn't easy, but they were ranked number one in the NRL for slowing the opposition's play-the-ball speed with an average of 3.56 seconds. The hope there is that, on the back of that, the Titans can fix their defensive frailties in the middle of the park where 26 tries were scored by opponents.

With Trevor Gillmeister on deck more regularly this season to give the Titans more defensive clout, the good work the forwards have done in the play-the-ball area should reap more rewards.

What you need to know NRL Fantasy-wise

Brennan is in his second year of top grade coaching and now has more staff in place to look after off-field matters than he did in 2018. He can now focus more fully on coaching the NRL team after what he described as "a whirlwind" initiation when he arrived at the back end of 2017.

Brennan also has more job security after having his contract extended but knows that only results on the field will provide any guarantees.

The challenge for Brennan is to get his side firing throughout the entirety of a game, let alone a season, and cultivating more of a killer instinct in his squad.

"People talk about being consistent week in and week out but we have got to be consistent for 80 minutes," Brennan said.

"We led 16 games last year at some point. We had some really good patches but to be successful at NRL level you have to be on for 80 minutes and we proved that last year.

"We were in good positions where we led, but just couldn't go on with it."

Brennan has got closer in 2019 to having the squad he wants after successfully going to the market. The positive for the Titans is that the majority of their big guns are re-signed until the end of 2020 or beyond. It will be a big year for off-contract players Max King, Phillip Sami, Mitch Rein and Ryley Jacks. Securing rising star AJ Brimson beyond 2020 will also be high on the Titans' agenda.

Do the Titans have the strike power out wide to make the most of what their representative forwards and talented halves provide?

There is quality in the back five and honest, consistent NRL performers such as Michael Gordon and Anthony Don, and now the likely positioning of game-breaker Peachey in the centres. As a unit they don't have the superstar potency of back fives like the neighbouring Broncos or the Sydney Roosters.

James has no doubt the depth of quality finishers are on deck to keep the scoreboard ticking over for the Titans.

"I think we 100 per cent have the strike power we need with Anthony Don and Phil Sami both really good finishers for a start," James said.

"And at the moment we have the battle of the centres between Peachey, Brenko Lee, Brian Kelly and Dale Copley who are all regular first graders.

"Young players like Sami and AJ Brimson have plenty of flair and, as we saw last year, they have the ability to create something out of nothing."

Ash Taylor. On the surface the Titans halfback may not seem like a bolter but his mediocre back end of 2018 has Taylor well down the Queensland Maroons pecking order. At this stage you’d have to think Daly Cherry-Evans, Cameron Munster, Michael Morgan, Ben Hunt and Anthony Milford would all be ahead of him in the race for a Queensland halves positions. If Taylor has a stunning start to the year and there is an injury or two he could well rocket into contention when the Queensland selectors meet to decide their squad for Game One of the Holden State of Origin series.

Everyone knows the joker at the Titans is hooker Nathan Peats. His amusing outlook on life provides his followers with plenty of laughs when he stitches up his teammates and he's also not ashamed to put himself on show as well. Peats' two sons and fiancé Jade are at the centre of his world as he shares many beautiful photos of their daily adventures together.

"Last year we didn't have the depth but this year we do. If there is a form slump I am not afraid to drop players.

"I don't pick my team on reputation or salary. I pick the team on who earns the right to wear the Titans jersey and that won't change, but this year I have a bit more luxury because of the competition for spots." – Titans coach Garth Brennan.

Arrows indicate players who signed after the submission of initial rosters on November 1, 2018. 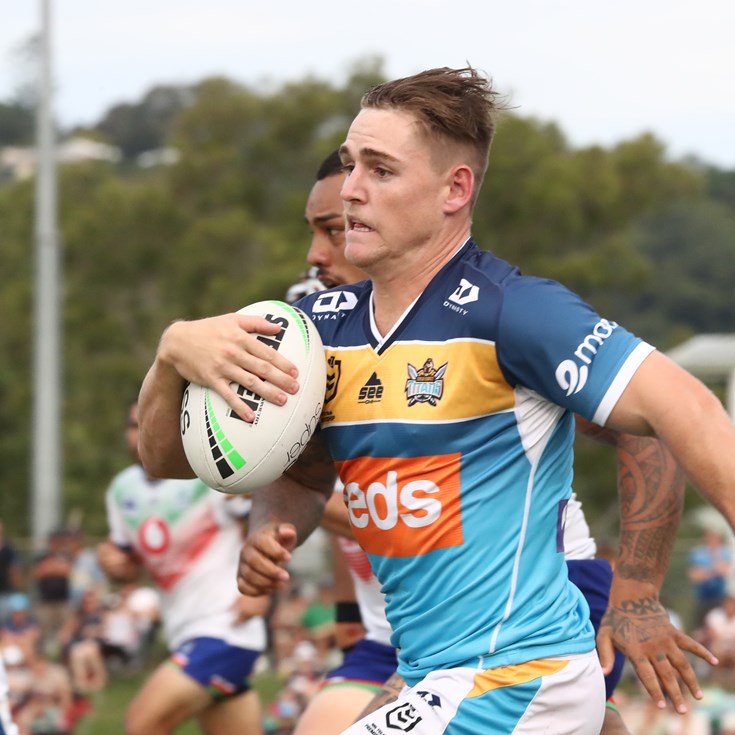