Defenders rarely know what Tyrone Peachey is going to do.

Often his teammates have no clue either.

Truth be told, even Peachey himself is not up to speed with the ‘Peach plan’ at all times.

It's the addition to the Gold Coast Titans that has the potential to most positively influence their season, but if not used correctly it could also be a millstone around their necks.

When the Titans run out against the Raiders in round one Peachey will line up in the centres, but where he spends the ensuing 80 minutes remains a mystery.

In Saturday's final trial against the Broncos the former Panther was shuffled into the forwards late in the first half to allow AJ Brimson to play in the backs.

Given his ability to play in the halves or at fullback, Brimson is shaping as Gold Coast's super sub on the interchange bench but Peachey is likely to be affected by whoever coach Garth Brennan decides to bring from the field.

Peachey's versatility will give Brennan cause to closely consider the make-up of his bench and it's a combination he needs to get right sooner rather than later.

"It may take a few weeks into the season before we get the right combination and that's probably why we'll be a better side as the season goes on," Brennan said.

"I don't want to be chopping and changing all the time. I want to have some continuity.

"Peach and I have had a few discussions about how I can use him best and we'll toy around with a few things.

"It's hard to put a structure around him when he plays off the cuff but that's what I love about him.

"When he gets the football in his hands, the crowd stands up. Sometimes the coach stands up because you think something's going to happen.

"Sometimes it's good, sometimes it's bad, but he's a player that you love having in your football team because you know he's a competitor and something will happen when he gets the ball in his hands."

Indigenous All Stars teammates in February, Peachey and Tyrone Roberts will partner up on the left side at kick-off but the Titans five-eighth admits much will depend on Peachey as to how they connect on the field.

"You can't try and set him up for something, you've just got to let him do what he wants," Roberts said.

"We just stick to what we do at training and then he comes in.

"He lets us know where he is. If he comes in he'll say 'Give it to me' or 'I'm off your shoulder'. He's always got something in his head.

"Everyone knows how he plays but the defence can’t predict it, and that's the good thing about it.

Notably happier with Roberts back from his one-year stint in England, halfback Ash Taylor is also likely to benefit significantly from having Peachey in the vicinity, even if he's not sure exactly what form that will take.

"He brings himself into the game. There's not really much more explanation,” Taylor said.

"He does his own thing, inserts himself into the game when he thinks he needs to and that's something that benefits me.

At a time when every NRL club operates within a 'structure' both in attack and defence, Peachey refuses to conform.

Since his first grade debut in 2013 the 27-year-old has been chosen in the starting team at fullback, centre, five-eighth, hooker, lock and in the second-row as coaches wrestle with how best to maximise his talents. In 46 of his 116 career NRL games they've given up and selected him on the bench.

He's one of few genuine footballers still left in the game at the highest level and for that, he makes no apologies.

"I don’t really know what I’m going to do at certain points in the game.”

Whatever number he is wearing or where he is situated on the field, a fit Tyrone Peachey looms as the match-winner the Titans need.

"When the game is there to be won, I guarantee you that Tyrone Peachey will go looking for the football," added Brennan.

"He wants those moments, he wants that involvement and that's what I want." 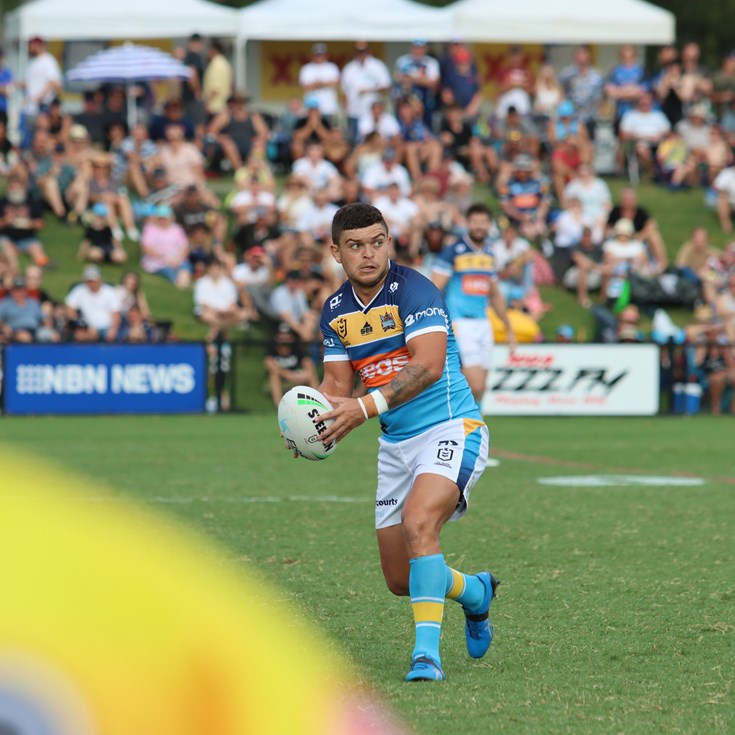