Returning Titans lock Jai Arrow has vowed to use the opening 20 minutes against the Dragons on Saturday to erase the memories of Sunday's shocker against the Roosters and take a crucial step in avoiding the club’s second wooden spoon.

The 58-6 humiliation at the hands of the Roosters last Sunday left the Titans four points adrift at the foot of the Telstra Premiership, yet with two games against the Dragons in the final five weeks they can still avoid the dreaded wooden spoon.

Arrow hasn't played since injuring his ankle against the Warriors in round 14 but rather than eyeing off an 80-minute comeback is determined to get his team on the front foot with a ferocious opening salvo against a battle-hardened Dragons pack.

"You could say that it's in the back of our minds,” Arrow said of a looming wooden spoon.

"The Dragons are not playing with confidence just like us so if we can play good footy this week rolling into the last five weeks then hopefully we can win a few games and get ourselves off the bottom of the ladder.

"If we can come out and compete and starve them of the ball then hopefully we can gas them and eventually put some points on them and put them to bed.

"I'm coming back this week to bring that energy and bring that effort that we've been missing for the past couple of weeks.

"Hopefully I can do my job and come out injury free.”

Holbrook's plan to turn Titans around

Sixth on the ladder through six rounds, the Dragons have suddenly entered wooden spoon calculations as a result of five straight losses, the latest a 12-4 defeat at the hands of the Eels on Sunday.

A wooden spooner with Parramatta last season, Dragons fullback Corey Norman described the unwanted honour as “the most embarrassing thing ever” but halfback Ben Hunt concedes that they, like the Titans, are a team lacking confidence.

“It feels like a team who is playing with all their confidence down a bit,” Hunt explained.

“Everything we have been doing at training has been feeling nice and we get to the game on the weekend and things are a bit off. You’re missing a few kicks or your passes are a bit off.

“Mentally it’s hard to get your head around it because you feel like you’re doing the right things and it’s just not coming off for you.”

Similarly determined to avoid claiming Gold Coast’s first wooden spoon since 2011, Titans centre Brian Kelly has no doubt the inclusion of Arrow will help to improve their position on the ladder.

Sami flicks it out to Jacks

"You know with Jai that he's just going to rip in and puts his heart on the line,” Kelly said.

"He was a workhorse for us before he had that ankle injury.

"We're on the bottom by two wins so we've just got to get those two wins and get off that bottom.

"You definitely don't want to finish up at the bottom. No one wants to come last so there'll be a little push but we want to do it for each other.

“Rip in and finish off the season on a high.” 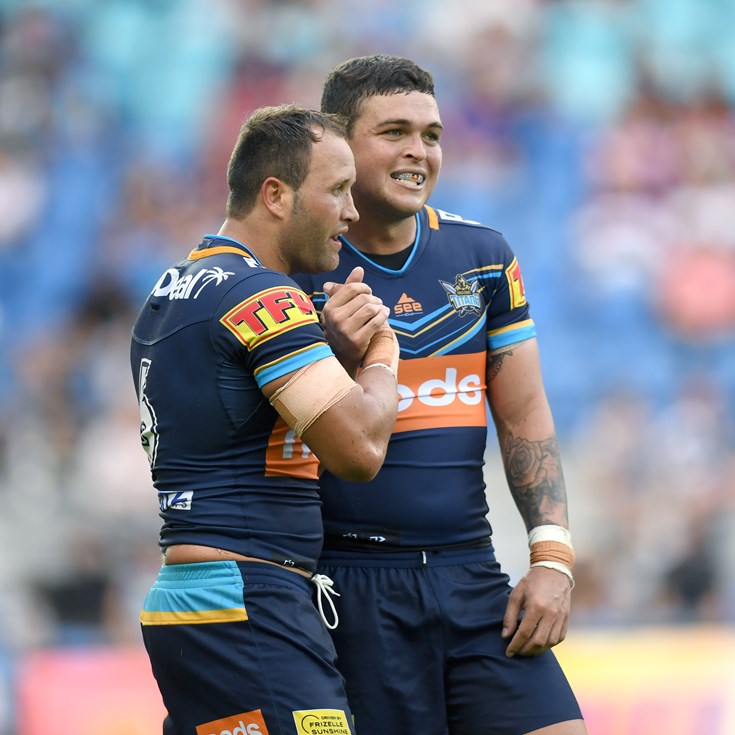